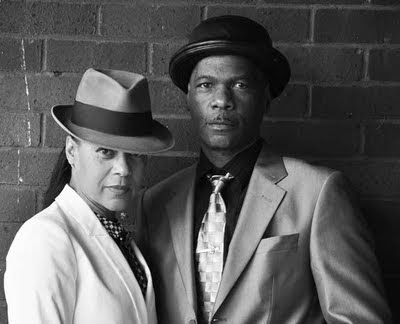 Here's a treat!  As part of the promotion for the release of The Selecter's brand new single 'Big In The Body, Small In The Mind' this past week, original lead singers Pauline Black and Arthur 'Gaps' Hendricksen shared a list of their top 5 favorite ska and reggae songs.  While the song selection is great, the stories that Black shared behind each of the selections are even better.

If you haven't had a chance to pick up a copy of the new single (watch the official video here), please consider doing so.  The song is available for download via Amazon.com in the U.S. and Amazon.com in the U.K. Without further ado, let the music and the stories begin....

1. Hill and Gully Rider by The Charms - Gaps selection

This was one of the first reggae songs that Gaps heard. Until then he had largely listened to English 60’s pop music in Luton, where he lived. He remembers listening to Cilla Black, The Stones, The Who, The Hollies- a favourite of his was Winchester Cathedral by the New Vaudeville Band. He says that his favourite singer was James Brown- he’s always had an eclectic taste.

I love the feistiness of Ms. Dean’s delivery - her faux naïve vocals are at odds with the lyrics of the song- there is a certain knowingness- this is a woman who knows exactly what she is doing -'lick him hard ‘pon him head'- such a good lyric & the best method I know for keeping a band in control!

Gaps learnt to shuffle listening to Phoenix City, when he entered a dance competition in a club, Burtons in Cricklewood- he didn’t win, some guy won who did a cartwheel shuffle - but undeterred, Gaps went away and mastered the art of the cartwheel shuffle, winning shuffling competitions, at the 67 Club in Bilston. In fact he is still working on getting that particular move back in the current Selecter set. BTW He can also still do the splits.

The Selecter toured with the Skatalites in America in the early 90’s. Tommy McCook, Roland Alphonso, Lloyd Knibbs, Lloyd Brevitt, Lester Stirling were all there. We shared a tour bus with them. As old as they were, they liked to watch soft porn videos on the TV at the front of the bus. The Selecter occupied the back of the bus. I would often surprise them by going up the front of the bus to get a soda or something and they would immediately switch off the TV as soon as I appeared and try to not look guilty. It was my favourite game of the tour. Not a lot of people know this.

I adore Prince Buster. My father who was from Oshogbo in Nigeria, owned this record in 1964. I have a copy of it with a ‘made in Nigeria’ imprint. Apparently ska was enjoyed in Nigeria in the early 60’s. My father obviously practiced what he preached, because he had 8 wives and I am the oldest of his 17 children.

Prince Buster can be forgiven for his unreconstructed male musical offering, because The Selecter had the opportunity to work with him on two separate occasions in the 90’s, in Japan and in Miami. We also recorded a version of Madness with him, with Neol Davies on guitar.

Prince Buster is a generous man, with a mesmerizing stage presence who welcomed the band into his home and cooked us chicken, rice & peas (well his wife did). He is currently not very well, so I’d like to take this opportunity to wish him better and it would be wonderful to see him back where he belongs - on stage.

5. The Boiler by The Special AKA featuring Rhoda Dakkar - Pauline's Selection

This song is all about the abilities of the wonderful Ms Dakar to make a work of art out of something so harrowing. She is one of the bravest ladies I know. She had the guts to perform this song (originally with The Bodysnatchers) in 1979 to a largely male audience, who were mostly waiting for The Specials or The Selecter to perform. The song speaks for itself and is still the lot of too many young women. By the way I consider that Special AKA never get the accolades that they should- they made some brilliant music- wish they would re-form!