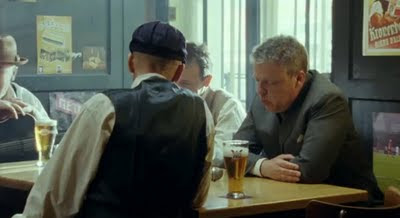 Madness have done it again!  The band who have previously lent themselves to a number of iconic ad campaigns (most notably a series of Japanese TV commercials for Honda in the early 80's and wristwatches in the 90's)  have partnered with premium lager brand Kronenbourg 1664, to record an amazing, slowed down re-arrangement of 'Baggy Trousers' (re-titled 'Le Grand Pantalon) for a music-centered ad for the brand's ‘Slow the Pace’ campaign. The song has been specially re-written by the band for the ad more than 30 years after it was first released. Earlier this year a spoken word version of 'Our House' was used for a Virgin Media television ad.

Set in an intimate and relaxed French bar, we see Madness’ front man Suggs casually leaning over a table, singing the lyrics to ‘Baggy Trousers’ at a much slower pace pace. Mike Barson is seen gently playing along on the piano, someone joins in with an accordion and another strums a large acoustic bass guitar. In a subtle nod to the band’s manic videos, saxophonist Lee Thompson, who is seated at another table, is slowly lifted from his chair by a wire attached to the ceiling fan above him. The other patrons in the bar (including all the members of the band) are seemingly unaffected by the goings on and continue to enjoy their pints of Kronenbourg 1664 in the relaxed, slow atmosphere.

The 'Slow the Pace' campaign has previously attracted significant consumer interest with 20,000 downloads of the Kronenbourg 1664-inspired version of Motorhead’s classic track 'Ace Of Spades' being snapped up in a matter of days of the campaign launch last fall.

Below is a short documentary charting the process of Madness re-writing the track as well as the ad itsefl which features all the members of the band in disguise. The new low velocity 'Baggy Trousers' is now available for download on iTunes.

Here is the full version of 'Le Grand Pantalon'

brilliant..is there nothing madness cant do

its about the 30th anniversary of ghost town!