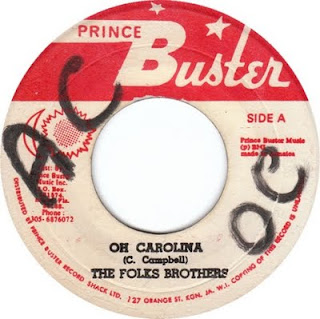 While most music fans are readily familiar with Shaggy's mid-90's cover of 'Oh Carolina', the story behind the original recording of 'Oh Carolina' by The Folkes Brothers is in essence the story of Jamaican music.

In 1960, Prince Buster (then a relative unknown who was working as a DJ and bouncer for Duke Reid) approached the legendary Rastafarian percussionist Count Ossie, who had established one of the first Rastafarian camps in Wareika Hill, to record for him.  After much encouragement from Prince Buster that he would keep the essence of the Niyabinghi -style drumming intact on the recording, he booked Count Ossie and his drummers along with Owen Gray on piano and Ronnie Bop on bass drum into a small recording studio.  Once there, Buster did handclaps and imitated horn riffs while The Folkes Brothers, a trio of teenagers, Miko, John and Junior, did the vocals capturing it in just two takes.  Until this past week, it was the only recording the group ever did.

The result is arguably one of the most important records in Jamaican musical history and probably the most popular Jamaican dance oldie ever.  According to Kevin O'Brien Chang the author of Reggae Routes: The Story of Jamaican Music:


"Early Jamaican recorded music was often just an attempt to duplicate American R&B songs. And the usual result was a third-rate copy on fourth-rate equipment of second-rate tunes sung in a quasi-American 'twang'. It's hardly an accident that not many pre-independence Jamaican tunes are played on the radio."

"But 'Oh Carolina', whether  by design or accident, contained distinctive elements not heard in any previous R&B copy.  Count Ossie's drum group had the most to do with it, but the song's fresh sound wasn't just due to the drumming. What was original was the way the drums played off the other instruments and the singers' voices, trailing just a bit and almost play call and answer.  Combining the energy of R&B with the hypnotic repetition of Rastafarian drumming, the throbbing beat was eminently danceable but not frenetic.  If one song can be singled out as signifying the birth of reggae, 'Oh Carolina' is it."

During a famous court case in 1994 to determine the lawful composer of the song following the success of Shaggy's popular cover version, a judge finally ruled that John Folkes was the song-writer of 'Oh Carolina'.  According to an interview that Folkes did with reggae historian Roger Steffens, the song was the first song in the history of Jamaica to give the Rastafarian movement respectability.  It was also completely unique and cutting edge sound wise:


"'Oh Carolina' is not ska; neither is it calypso or R&B or boogie woogie or mento or even rock n'roll. It is essentially an innovative heritage folk song. But it has echoes of some of the above. It was and still is a party song. Its a powerful thing, not written with any kind of formal tradition, but just powerful feral writing." 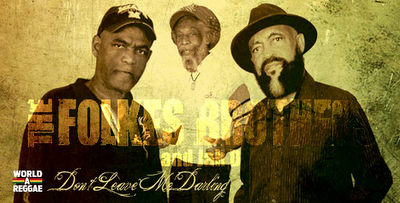 Believe it or not, but the The Folkes Brothers have just released their very first album 'Don't Leave Me Darling' (available for sale on Digistation) since the original release of 'Oh Carolina' in 1960. According to an interview in the Jamaica Gleaner, Mico Folkes explained that the brothers went their separate ways following the success of 'Oh Carolina'. Now, more that 50 years later they have decided to give it another go:


(Mico) said he got a scholarship to attend a bible college in the United States, while his brother John Folkes went on to get his PhD at the University of the West Indies and is now a professor in Canada. However, his younger brother, Junior Folkes, "never left the music industry," he said.

"We always sing together like we never left Jamaica. We always sing and write songs. Junior Folkes, he was the one trying to bring us back together, always wanting us to get some songs together. John is not in the group at this time," Mico Folkes said, noting that the album was done by himself, Junior Folkes and Jah D, who was the engineer and made all the music.

Below are all three versions of 'Oh Carolina' including the original by The Folkes Brothers, followed by Count Ossie's (who recorded his own version on his seminal 1973 album 'Groundation') and Shaggy's version from 1993.

That's still not the full story though is it? The Prince Buster version in the picture is credited to Prince Buster himself (C. Campbell) but the Folkes Brothers version is credited to someone Abrahams, who the heck was that? And I have a another version on a Trojan compilation LP from 1970 called The Man from Carolina by the G. G. Allstars which is credited to Ernest Ranglin. So if John Folkes really did write it (as per the Judgement), it sounds like he is due a heap royalties from a whole boatload of people not just Shaggy.

Unfortunately for Mr. Folkes, he sold Greensleeves the publishing rights to "Oh Carolina" prior to the Shaggy hit, so it's unclear if he really made that much from the deal.

Also, a bit of a correction, Buster was a bodyguard/bouncer for Coxson's dances, not Duke Reid. Buster and Dodd had a bit of war via songs (Spit In The Sky by Delroy Wilson and Buster's own "God Son" for example)

Actually - he DIDN'T sell the rights to the song - which is why this case did not end in 1994 with just the judgment giving him authorship, and therefore, automatic copyright ownership of the song.

John is my dad.
Uncle Mico started this new group behind my dads back. Mico and Junior did nothing but sing back up...they were brought in by my dad but otherwise had nothing to do with the creation. Prince Buster ...Cecil Campbell is a liar and Shaggy is a thief. He did NOT have any permission to make a bumba raas verson.
They are all thieves and liars and Greensleeves proved to be no better

I am curious as to why, on some versions of the recording, around second 00:16, there appears to be the sound of DJ Kenny Everett saying "Capital" - the name of the radio station he used to work at.

Mr.John Folkes was my English/Drama teacher in High School 17 years ago, I've had many teachers and professors but he will always be the one I remember, hope he's doing well <3