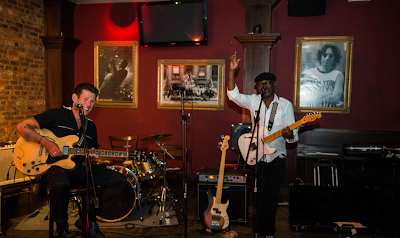 In a week in which The Specials played a series of triumphant shows around the northeastern U.S., a very lucky group of people who came out to the Electric Avenue show at Characters NYC in New York City this past Friday night July 19th, witnessed something incredible.

Roddy "Radiation" Byers, the iconic guitarist of The Specials, who was booked to perform a solo show of his bluesy, ska rockabilly material from his other band The Skabilly Rebels on an off night during the band's U.S. tour, was joined by his equally iconic band mate Lynval Golding.  The two of them played a completely impromptu and stripped down set of some of the band's best songs in a small intimate setting which took on the feel of a secret show for winners of a radio contest.

Byers joined The Specials when the band was called The Coventry Automatics and wrote several popular songs for the band. The most successful was "Rat Race," which peaked at number five in the UK Singles Chart in May 1980.  Byers also wrote "Hey Little Rich Girl,"which appeared on The Specials second album, More Specials and was later covered by Amy Winehouse on her successful album "Back To Black." Byers also wrote and sang the lead vocal on "Concrete Jungle" and the track "Bragging and Trying Not to Lie" which was released as a free single with initial copies of "More Specials." 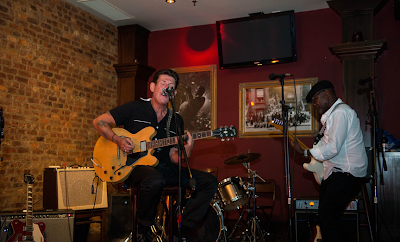 According to Lynval, this was the very first time that he and Roddy had ever performed together like this, and while Roddy joked that it should be the last time!  "Hey Little Rich Girl," and "Rat Race" which were penned by Byers, and particularly "Doesn't Make It Alright" (which Lynval sent out to George Zimmerman) took on a haunting and emotional quality.  The fact that the band's current U.S. tour is very likely it's last and that the overall future of the band who have been playing together since reuniting nearly 4 years ago is uncertain, added to the poignancy and power of these versions of the songs.

Luckily, my Electric Avenue partner, Steve Shafer (Duff Guide To Ska) and our friend Bryan Kremkau (SkaPunkPhotos.com) were both ready to capture the one of a kind performance on video and in photographs.

Gotta say, for Rat Race, I actually VASTLY prefer Roddy's choice of melody for the verses to whats on the record :) Much more soulful!