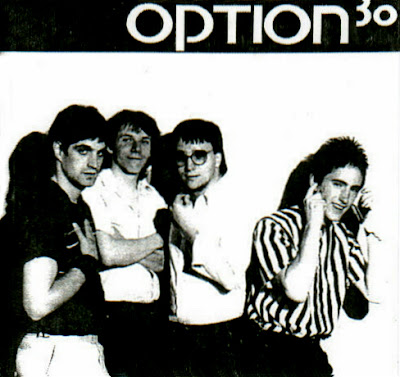 For those of us who came of age in the late 70's and early 80's, ska and reggae was the sound du jour. Like Hip-Hop in current American music culture, ska was the now sound and many non-ska bands and musicians flirted with it to varying degrees of success. Blondie had a hit with their cover of the rock steady classic 'The Tide Is High'? Who can forget Todd Rundgren's flirtation with ska on the song 'Bang On The Drum All Day'? Even Madonna tried the ska sound on for size when she was the drummer and singer for The Breakfast Club.

Add to that list Nine Inch Nail's front man Trent Reznor.  While attending college in Western Pennsylvania in the early 1980's, Reznor started playing keyboards and singing in a new wave band called Option 30. Although he wasn't part of the songwriting team within the band, a number of videos have surfaced of the group playing live in 1983. The footage mostly involves performances of 80's new wave cover songs (Falco, Billy Idol. Joe Jackson, Thompson Twins). However, one original ska/reggae song "Time & Chance" from Option 30's repertoire stands out.  Taking its cues from The Police (Reznor does sound a bit like Sting on the track), the song features reggae rhythm guitar and syncopated drums along with Reznor's Caribbean-themed keyboards.  Check out the song from the band's one and only demo recording.

Here is Reznor taking the lead on a live version of Joe Jackson's vaguely ska classic "Look Sharp," including the song's memorable drum and piano break.

Many thanks to Tone And Wave for download of the song and the heads up on this piece of ska music history.
Posted by Marco On The Bass at 7:45 PM

Don't forget about pre- Wham! ( the Executive) and Tears for Fears (the Graduate)

nice post! and here's my favorite Graduate track for ya: