The Specials Live In The U.S.A! 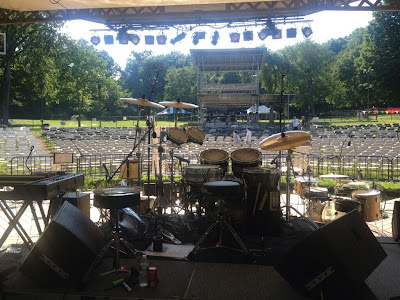 The Specials are now fully into their run of shows along the East Coast of the U.S.  Tonight they play the Ives Concert Park, which is an outdoor venue in Danbury, Connecticut before a big show here in New York City tomorrow night at Pier 26 and then shows in Long Island, New York and Asbury Park, New Jersey later this week. Separately, band guitarist Roddy "Radiation" Byers is playing a solo show in New York City on Friday night 7/19 at Characters NYC while the band have an off night.

I thought you all might enjoy some behind the scenes pictures that members of the band have shared. The top photo was taken by drummer John Bradbury from behind his kit at the show in Danbury tonight. He tweeted "Tonight I'm playing outdoors, actually hotter than indoors but more wildlife about:-)"

Below is a candid of bassist Horace Panter and guitarist Lynval Golding sound checking at the same venue. They both seemed  dressed for the hot weather that has descended on much of the New York area. 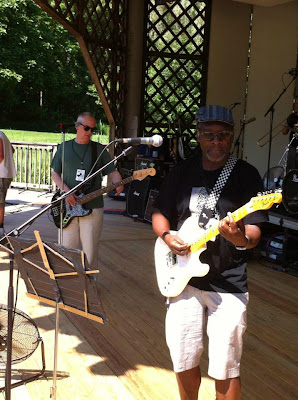 Hope to see a lot of you at the show in New York City tomorrow night. It should be a big NYC ska family reunion!
Posted by Marco On The Bass at 5:44 PM

I'm taking the train in from Rochester (7 hours) just to see the show - wouldn't miss it!