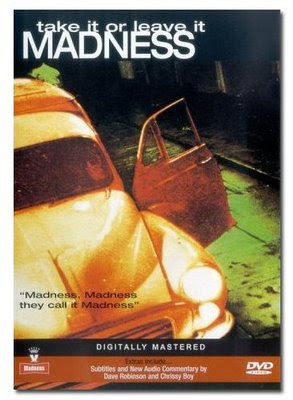 Madness have just announced plans to re-release their 1981 silver screen debut, the autobiographical "Take It Or Leave It," thirty-two years after its initial release. Out on October 7th, the package will include a DVD of the film and an audio CD of the soundtrack, which has never previously been officially released.

Directed and produced by Dave Robinson, head of the band's original label Stiff Records, "Take It Or Leave It" provides a down-to-earth narrative of the trials and tribulations of the early career of one of Britain's most iconic bands. With the backdrop of Camden Town, the film depicts the cult band's epic rise from their humble start as a pub band to their first glimpse of fame.

The accompanying CD soundtrack album provides an interesting perspective on the band's early work and features 26 songs including singles, b-sides and album tracks. Two of the songs aren't by Madness: Fats Domino's "I'm Walkin'" and The Four Tops' "Reach Out I'll Be There," both of which can be heard in the film.
Posted by Marco On The Bass at 3:26 PM

One of my most prized DVD's. I'd love to get a screening together of this film too!