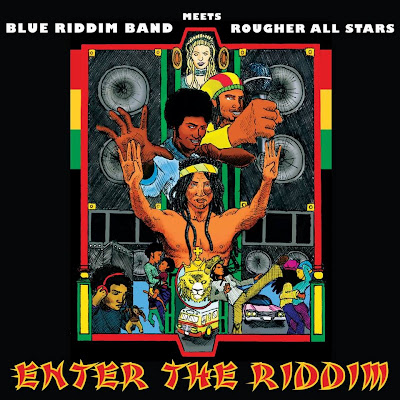 Blue Riddim Band is readying the release of their latest album "Blue Riddim Band Meets Rougher All Stars: Enter The Riddim." The album is due out in September on Rougher Records and is a follow-up to their fantastic 2010 album "Tribute." The first single from the album "Do Me Like That" featuring Roy Sahyantis is out now and available for download on iTunes and from Rougher Records.

According to Blur Riddim bassist Todd "Bebop" Burd: "We've talked with Roy for over ten years about collaborating, and then everything came together. He hails from Kingston, Jamaica, and lives part time here in Kansas City, MO.  He contributed lyrics to the Black Uhuru album "Anthem", including the title track.  It is also well known within the inner circles of reggae that Roy named the band, "Black Uhuru." Having worked primarily as a lyricist, Roy expressed a desire to finally sing his own song. We're excited about this track and have plans to record again with him in the future." The new single and the album is a collaboration between Blue Riddim with the Rougher All Stars and features a variety of singers and players from all of the labels' projects as well as individuals the band have worked with over time.

While reggae has become a global phenomenon, the idea of an American reggae band has often been hard for a lot of music fans to comprehend. However, very few groups have played reggae as convincingly as the Blue Riddim Band who hail from Kansas City. Drawing on influences from Coxson Dodd's Studio One label and Duke Reid's Treasure Isle label, Blue Riddim has flourished for four decades by mastering the rhythms that are the basis for all Jamaican music. While other non-Jamaican reggae bands have fallen into the trap of trying to reproduce the crossover sound of Bob Marley and The Wailers, Blue Riddim became students and later experts who could play a range of ska, rock steady, and rockers reggae like the originals that inspired them.

At their height in the early 1980's, Blue Riddim had the distinction of being the very first American reggae band to be invited to play at Reggae Sunsplash. Their blazing set of ska and reggae covers and originals as dawn was rising over Jarrett Park on August 15, 1982 is legendary. They earned two encores from the crowd of 20,000 Jamaicans who were mesmerized by their 'blue eyed reggae.' Their Sunsplash performance was recorded for the LP 'Alive In Jamaica' released in 1984 which was later nominated for a Grammy for best reggae album in 1985 (see video below of the band performing 'Nancy Reagan'). Let that sink in for a minute. The band was nominated for a Grammy!