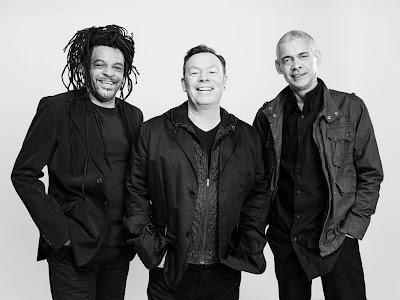 So, if you've been following along at home, there are two UB40's these days: the version led by original singer Ali Campbell with keyboardist Mickey Virtue and toaster Astro, and the version of the band led by Ali’s two brothers -- guitarist Robin Campbell and singer Duncan Campbell with the remaining original members -- Jim Brown, Brian Travers, Norman Hassan and Earl Falconer.

Campbell and his band mates have been busy touring across Europe and the U.K. and have just released  a preview of the first single, a cover of 50's doo-wop group The Rays "Silhouette" due out on August 18th on Cooking Vinyl Records.  The song will feature on Campbell's new album out this fall that will feature a mix of original songs (give a listen to the previously released"Reggae Music") as well as reggaefied cover versions of classics by The Beatles, Bob Dylan, The Chi-Lites and others.

Campbell is also prominently featured on the Radio Riddler version of "Purple Rain" from the excellent Purple Reggae album.

According to a recent interview Campbell did to promote his tour and new single with a newspaper in the U.K., he intends to continue using the UB40 name.


Nobody owns the name you see. UB40 was a government registration form to get your benefits and we never patented it. I think we’re all entitled to use the name, all original eight of us. So at the moment there are two UB40s out there: one promoting country and western with a bloke who’s never made a hit record in his life, and there’s another one promoting reggae and we’ve had 40 top 20 singles. It’s up to the fans who they want to go and see; the original singers or somebody else.


It has been confusing but since I left the dark side I have made very clear that it’s “Ali Campbell’s UB40” or “Ali Campbell – the legendary voice of UB40”. I’ve always made it clear who I am, whereas the UB40 dark side have never once said that it’s not the original line-up, and for five years they’ve been punting off the brand name. It’d be like going to see The Stones and Derek Jagger comes out; you wouldn’t be very happy would you? I wouldn’t!

I was impressed with the quality of the sound on "Silhouette."  The song is a good start for Campbell, Virtue and Astro and it captures the classic UB40 sound that many fans of the original band fell in love with.  The true measure for me will be to see if the new album can maintain this level of quality.  We will see.
Posted by Marco On The Bass at 9:16 PM

"we never patented it" is a cheap cop-out for riding on the UB40 name after he specifically said not 3 years ago "We are not UB40, we are Ali Campbell & The DEP Band"

There's only one UB40, and that's the band Ali chose to leave...

UB40 with duncan singing is like someone doing karaoke.nice man but makes me cringe

There's only one band that sound like UB40....and that's NOT the band Ali chose to leave...

Ali Campbell IS ub40 and without him they could never sound the same... From a lifetime fan...

Soooo pleased Ali getting the original band members back together. HE IS UB40. Love the new single. Will be buying the new album tomorrow.