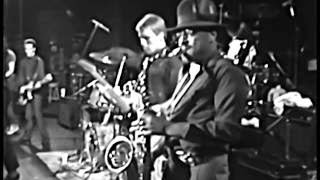 Over the past two years, the wonderfully amazing Music Vault has been remastering more than 13,000 concert videos, which they are now posting up on YouTube. The footage spans the last five decades and features performances by a wide array of legendary artists.

I recently came across footage of a fantastic live performance of The Beat from the Capitol Theatre in Passaic, New Jersey from September, 1980.  The Capitol Theatre was built in 1926 as a vaudeville house, and later served as a movie theater. Promoter John Scher bought the property and converted it into a venue for rock concerts. Throughout the 1970s and into the mid-1980s, the 3,200 seat theatre was a popular stop on nearly every major rock artist's tour. The venue was known for its in house video system which resulted in a number of good quality, black and white video bootlegs.

The Beat were the support act for The Pretenders in what would be their very first tour of the U.S. during the fall of 1980. As such the band receive a muted response from fans of Chrissie Hynde and company who were likely perplexed by the punky reggae sounds of the multiracial septet from Birmingham. As a side note, I procured tickets to see this show without telling my parents who forbid me to attend on a school night when I let them know the day before the show. I was forced to sell the tickets at school to classmates who made sure to let me know what I had missed the next day!

The video is a must watch for anyone who missed the band in their prime. Shot from a variety of camera angles with remastered sound, the footage reveals The Beat at the height of their powers -- Psychedelic Rockers and Mirror In The Bathroom are both breathtaking.  Saxa in particular is a revelation as his melodic riffs and solos reach sublime heights.  Its also great to hear the keyboard work of Dave Blockhead whose playing was often overlooked in the band's records.

Thanx, from Paris, to share this incredible vidéo !!!
I think the same about Dave Blockhead !, i hope one day to read from him (or Saxa), about The Beat.
Anonymous 73