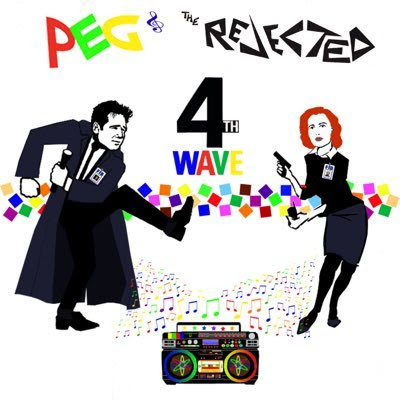 When we fall in love with a song, an album or a band, we're not making a cognitive decision. Its primal.  It's inexplicable. We feel it in our bones and our nerves.   The music that we fall in love with becomes part of our emotional DNA. It takes up home in our heart and soul.  It sparks neurons that light up our brains.  We hit play. Then hit rewind as soon as the song ends. And then hit play and rewind again and again.

And so, late last year, after the Presidential election, when I was grappling with some dark thoughts and fears about the sea change taking place in our country, someone sent me a link to Peg & The Rejected's album "4th Wave." The album cover art piqued my interest.  It was a hodgepodge of 2-Tone iconography including the album title:  4th Wave?!  After reading hundreds of debates about the various waves of ska, I laughed at the idea of a 4th Wave of ska.  And so, with no preconceived notions or any idea who Peg & The Rejected were, I played their album and my neurons started sparking! And then I played the album again and again. Soon the songs on "4th Wave" took up home in my heart and soul.  These are songs that deserve to be heard by a much larger audience.

Who the hell are Peg & The Rejected you ask? This Long Beach, California based band are better known as the 90's era ska punk/reggae band The Dingees who came together in the mid-90's when Matthew "Pegleg" Roberts was working on the road crew selling merchandise for Orange County Christian ska band The OC Supertones. He befriended the band's sax player Dave Chevalier and they talked about the burgeoning Orange County ska scene.  Soon after they returned from the tour, Pegleg and Chevalier recruited other musicians and began performing as The Dingees (a reference to one of the band members smelly "dingy" feet!)

Things moved quickly for The Dingees -- who honed a ska punk sound and started playing out around Orange County.  They were soon signed to Tooth & Nail Records recording three albums in four years -- Armageddon Massive (1998), Sundown to Midnight (1999) and The Crucial Conspiracy (2001) -- and touring non-stop.  Shortly after the September 11, 2001, the band learned that they had been dropped by Tooth & Nail.  At that point, the band went into DIY mode and over the next few years worked to home record, self-produce and independently release Rebel Soul Sound System for free in 2010. And now, nearly seven years later, the band has released "4th Wave,"

I often joke that I worship at the Church of 2-Tone and in my opinion, the songs on "4th Wave" add chapter and verse to the canon of 2nd wave ska music created by The Specials, The Selecter and The Beat.  And while Peg & The Rejected are essentially The Dingees, they have refined their punk meets reggae sound to record a truly 21st century version of 2-Tone ska that is worthy of the 4th Wave moniker by embracing the ideas and concepts of protest, resistance and social criticism inherent in original 60's ska, 70's reggae and 2-Tone music.

I interviewed Pegleg about how he became a musician and how he started The Dingees and now Peg & The Rejected.  I also spent a good deal of time talking to him about the songs on "4th Wave" and how his views on years of U.S. imperialism abroad have impacted his world view.

Heard in our current cultural context, "4th Wave" can legitimately be called the first Trump-era ska album that mixes the best of The Selecter, Operation Ivy/Rancid, Fishbone and The Skatalites into an original mix of thoughtful, heartfelt and thought provoking songs about the current state of the world. Its an album about life in the U.S. today -- secrecy, lies, fake news, propoganda, income inequality, police brutality, US aggression abroad -- and its effects.  There are so many memorable songs on the album, including the bittersweet"Stray Bullets" which is an instant classic. It features a chorus that could have been written by Pauline Black, the best 2-Tone lyricist ever -- "Stray bullets could only catch the innocent/guilty finger pointing trigger and pulling it."

Below are videos for many of the songs from "4th Wave" that I interviewed Pegleg about.