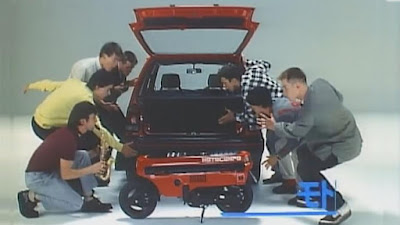 Madness fans are generally quite familiar with the songs 'In The City' and 'Driving In My Car'. They are both classics of the band's trademark 'Nutty Sound.' However, chances are that if you lived outside of Japan in the early 80's you might not have known that Madness appeared in a series of incredibly entertaining television ads for the Honda City, a small sub-compact car that came with a small folding motorcycle called the Motocompo that fit snugly in hatchback.

The story behind how Madness came to be pitchmen for Honda is one full of corporate intrigue and perseverance and ultimately success for the car maker and the band.  The Honda City was supposed to be a game changer for the Japanese car maker which at the time was stuck in a sales drought. Much thought and energy was put into its design and once it was ready to be shipped to dealers it needed an ad campaign. Looking to connect with a younger consumer, Honda's marketing team unexpectedly turned to Madness, then riding high in the charts, hoping they might just be perfect for a series of super-frantic TV spots. According to the Honda web site: '...the sales promotion staff attempted something completely different. They tried to create original music for young people, paying extra attention to rhythm in order to build a sense of pace and anticipation for the product. To that end, the production staff flew to New York in the hope of gathering musicians to create a City band. It was then that someone passed along the information that there was an English band that played a unique form of ska music, and that their dance style also was quite unique. The band was virtually unknown to Japanese music fans, but the staff decided to employ them anyway, attracted by their oddity and novelty. Upper management, however, simply would not hear of it.' 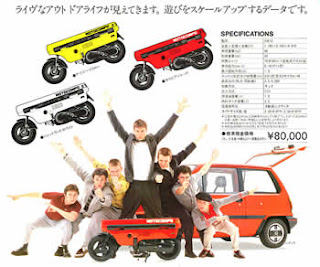 As it turned out, the band liked the jingle so much that they expanded it into a three minute song and released it as a b-side (B/W "Cardiac Arrest") that reached #14 in the UK charts. It was also included on Complete Madness, the band's best-selling greatest hits compilation from 1982. The longer version of "In The City" replaced the repeated brand name "Honda Honda Honda..." with the more generic "doomba doomba doomba". Later ads for the Honda City featured snippets of  the song 'Driving In My Car' which was also a hit for the band.

The band have continued to serve as pitchmen, most notable in the early 90's for Sekonda wrist watches. More recently the band's lead singer Suggs has served as spokesperson for Birds Eye fish fingers and in 2011 the band partnered with premium lager brand Kronenbourg 1664, to record an amazing, slowed down re-arrangement of 'Baggy Trousers' (re-titled 'Le Grand Pantalon) for a music-centered ad for the brand's ‘Slow the Pace’ campaign.
Posted by Marco On The Bass at 3:58 PM