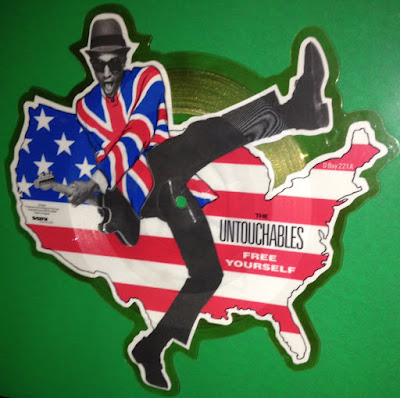 A few of the early chapters of the American ska oral history are nearly finished! At the moment I'm busy scheduling and conducting additional interviews for an epic chapter on the Untouchables who helped to galvanize the mod and ska scene in Southern California at the O.N Klub in Silver Lake and later found themselves signed to Stiff Records in the UK! I interviewed the band's keyboardist Josh Harris who shared a amusing anecdote of their experiences on the road in Europe:

"Touring Germany was kind of a wild trip. We ended up doing this one TV show with REM and the Ramones, and they gave each of us a flatbed truck, which was our stage. And they would just roll in one band after another onto this makeshift stage. We're all packed together like little sardines, up on that flatbed. But it was quite an interesting situation. I got to know Johnny Ramone because we were both baseball fans. I remember going onto the Ramones tour bus, and hanging with him a little bit, and he had the Mets game coming across the speakers on his tour bus. So I said, "How are you getting the Mets? We're in Germany." He says his wife was standing with the telephone in front of the Mets game on TV back in New York, broadcasting the game to Germany for him. Every Mets game got broadcast to Johnny while he was touring. He insisted on hearing every Mets game. And he'd be chatting, wandering around the bus. I guess his wife would just set the phone next to the radio and walk away. But he was that avid a baseball fan."

Here's video of the band performing on that 1985 tour.