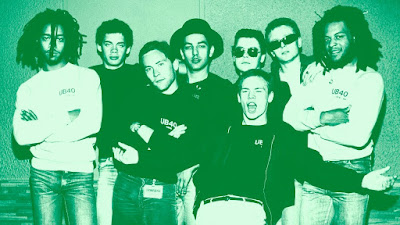 I had the honor of interviewing UB40 drummer Jimmy Brown for the American ska and reggae oral history. It's hard for me to describe just how important early UB40 albums like "Signing Off" and "Present Arms" were to me - and many other aspiring American ska and reggae musicians - as we were coming of age in the early 80s. They influenced me politically and musically and seeing the band live for the first time at Roseland Ballroom in New York (with opener Urban Blight!) in early 1984 was a memorable experience. Jimmy recalled what it was like to tour the U.S. in the early 80s:

"When we first toured the USA back in the early 1980's it was a bit of a revelation. We took the multi-racial aspects of our line-up for granted. We were at school together, we went to the same clubs together, wore the same fashions, bought the same music [mostly reggae and R&B], skin colour made no difference to us having grown up together. But when we came to the States it was a shock how segregated American society was. There was nowhere that really catered for us as a gang."

To that end, check out the video of "Dream A Lie" (one of my favorite songs by the band). As the story goes, the band made the video because they were receiving death threats from the National Front, one of whom wrote to them saying they were 'like the Black and White Minstrels'. This provocative video was their pointed response.