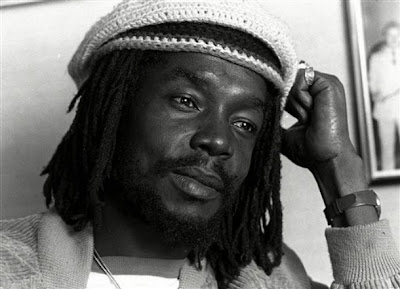 I intend to mark today solemnly with quiet meditation and reflection and then I will play the music of Peter Tosh very loudly to mark another tragic occasion that occurred twenty-four years ago today. Sadly September 11, 1987 was the day that Peter Tosh was murdered under mysterious circumstances.

In no way, shape or form can I do justice to the life and times of Peter Tosh within the confines of a blog post.  I would never even attempt to try.  Its too daunting a task.   Instead I turn to the the brilliant documentary 'Stepping Razor Red X - The Peter Tosh Story' directed by Nicholas Campbell and released in 1993 to tell the story.  In fact, the power of the documentary is that it is told through Tosh's own words which he kept in a series of cassette tapes he recorded that were discovered after his death. (read a New York Times review of the film which helps put the documentary into context).  The film succeeds in providing a detailed look at Tosh that is distinct and separate from the role he played in founding The Wailers and further helps to portray him as a separate musical personality with political and social viewpoints which clashed with that of the Jamaican establishment and government.


"And in the early 1990s when I realized that the whole world was only focusing on Bob Marley and everybody had forgotten about Peter, I decided to put together this film so the world could understand the mind of this great poet." -- Wayne Jobson - Producer of Stepping Razor Red X

If you are a fan of Tosh or are interested in learning more about his influence and impact on promoting reggae music then I recommend watching the documentary in its entirety.

To further honor Tosh, below is a fantastic 60 minute set he performed live at the Greek Theater in Los Angeles from 1983. The show features 'Pick Myself Up,' 'African,' 'Glass House,' 'Get Up, Stand Up,' 'Not Gonna Run,' and a smoking cover of 'Johnny B. Goode'.  Rest in peace Stepping Razor!