The Story Behind 'Love Of The Common People': Country Ballad To Reggae Pop To 80's Hit 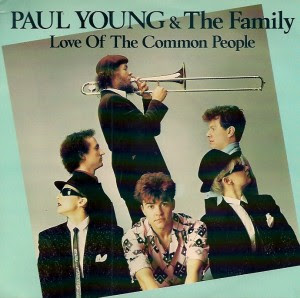 The first time I heard 'Love Of The Common People' as sung by 80's blue-eyed soul singer Paul Young, I was struck by the lyrics to the song. In contrast to the cheery melodies and backing vocals, the lyrics tell a bleak story of poverty and joblessness. There is a mention of 'free food tickets,' a reference to government food stamp and welfare programs, and the lyrics also describe the subject family as having holes in their clothes.

The song was written as a Woody Guthrie-like folk ballad by John Hurley and Ronnie Wilkins in the late 60's.  Though Hurley and Wilkins did not expressly convey it the lyrics, the song is a protest of what they saw as the failure of the American government to do more for the poor and unemployed than it already had.  As we endure the third year of the Great Recession, I could not think of a more appropriate song to write about, as a Republican Congress dominated by Tea Party members seek to cut and limit more and more of the safety net of unemployment insurance, Medicare and other benefits that the millions of unemployed and underemployed Americans have used to barely scrape by.

The song was first released in January 1967 in the U.S. by The Four Preps but gained prominence when it was recorded by Country singer Waylon Jennings.  Most of us who came of age in the 80's are most familiar with the Paul Young version which dominated U.S. and U.K. radio during 1983.  However, the most powerful versions of the song are soul and reggae versions.  The first was recorded by Washington, D.C soul/funk band The Winstons in 1969. However the definitive version was recorded by reggae vocalist Nicky Thomas in 1970, reaching number 9 in the UK Singles Chart. It was Thomas's only major hit single, and became his signature song, coming to define the term 'pop reggae'.

The story of how Paul Young came to record the song is very interesting.  Young met Jake Burns of Irish punk band Stiff Little Fingers at one of their concerts.  The band had added the song to their live set and Young asked Burns whether Stiff Little Fingers were planning to release the song as a single. When Burns told them they weren't, Young asked if they minded him releasing it as a single. They said he could, not thinking the single would do well. Burns later self-mockingly stated in an interview, 'Pfft! Go ahead. You'll never get anywhere with that, mate. Yeah, number 2, that'll teach me!' The Stiff Little Finger's version has a great punky reggae feel.

Young initially released his interpretation of 'Love of the Common People as a single in 1982, but it failed to chart. It was only when Young had his first hit in 1983 with 'Wherever I Lay My Hat (That's My Home)' that his record company decided to release the song again. The single peaked at #2 in the UK, and reached the number one spot in Ireland and the Netherlands. The song features a wonderful trombone solo in the middle which was provided courtesy of the one and only Rico Rodriguez. The trombonist had just endured the break-up of The Specials and decided to branch out and was tapped by Young to join his band.  Rodriguez mentioned the song in an interview.


Q: And it was time to escape the English raining to some sunshine for a change.

A: Yes, and before me go to Jamaica me do one recording with Paul Young, a song from Nicky Thomas, 'Love Of The Common People', and I think Paul Young made a hit out of it.

A: Yes, and I did the solo in that. And when I was in Jamaica I used to hear it on the radio in Jamaica, but since I'm in Jamaica here nobody don't even know is me who do the solo on that record. But it got regular play, it was regularly played on the radio.

Look for Rodriguez in the video of the song below.

Love the Stiff Little Fingers' take on this song! Never heard them do it.

And, you're right, it's definitely the time to revisit this song with what's been going on in the US.