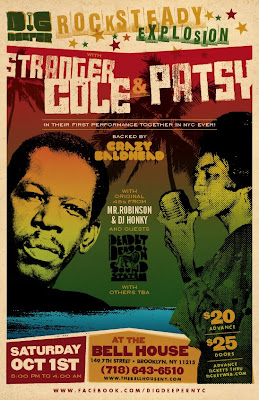 Stranger Cole and Patsy!  The names are synonymous with the founding of ska and rocksteady in Jamaica in the early 1960's.  Some of my earliest memories of discovering original 60's ska are of hearing Cole belt out the lilting and anthemic 'We Are Rolling' and Patsy duet with Derrick Morgan on 'Housewifes Choice' from the raw and always sensational 'Intensified: Original Ska 1962-66' album that rarely left my turntable in college.

Ska and reggae lovers living in the New York City metropolitan area are in for a real treat. Cole along with Patsy will be making his first ever appearance in New York at the Bell House in Brooklyn, NY this Saturday October 1st. The iconic singers will be backed by New York ska band Crazy Baldhead which counts guitarist Jay Nugent of The Slackers as a member. Tickets for the show are available for purchase online.  This is a chance to witness Jamaican musical history live and direct!

Stranger Cole began his career in the era of rocksteady and is one of the pioneers of reggae music as we know it today. Cole has worked with producers such as Arthur ‘Duke’ Reid, Clement ‘Coxsone’ Dodd, Prince Buster, Lee ‘Scratch’ Perry, Bunny ‘Striker’ Lee and Sonia Pottinger and recorded duets with Gladstone Ellis, Patsy Todd and Ken Booth.  Cole is a true reggae originator with a soulful voice to boot.

For most of the early 1960s, Millicent 'Patsy' Todd along with Millie Small (My Boy Lollipop) was one of the premiere teen stars of ska. She recorded numerous duets with singers Derrick Morgan and Stranger Cole. Todd's best-known hit with Morgan was Housewife's Choice for producer Leslie Kong. Her biggest hits with Cole included the uptempo When I Call Your Name and the ballad Give Me The Right, which were done for producer Arthur 'Duke' Reid. Since the late 1960s, Todd has lived in the United States. Most of those years were spent in New York City where she worked as a secretary at Lennox Hospital in Manhattan.

Have a listen to 'When I Call Your Name' a sweet duet Cole and Patsy performed together in the 60's and one that is sure to be on the set list this Saturday night!

Artibella is my favorite song!!!!
Thanks for the blog!!