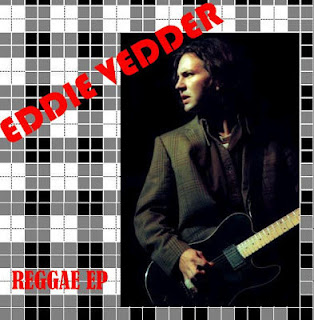 Well crooner may be pushing it, but before he launched off into rock stardom, Eddie Vedder dabbled in reggae music. Before joining Pearl Jam, he lived in San Diego in the late 80's and was very fond of listening to the Sunday night reggae show on local alternative radio station 91X. According to friends and roommates at the time, Vedder also owned a small collectio of reggae records including a few of Bob Marley's best known albums.

Some time during 1988, Vedder recorded a four song demo tape of his own songs including one titled "Reggae Woman." Though I would not say it's one of the best reggae songs I have ever heard (the rhythm guitar is slightly off and it meanders into rock), its still interesting to hear Vedder attempt a Marley-like "No Woman, No Cry", lover's rock song. His interest in reggae and Bob Marley has continued throughout his Pearl Jam years, and has been known to sing Marley songs accapella. He has also added part of The Beat's "Save It For Later" as a coda to "Better Man."

Hat tip to Tone & Wave for sharing this and enlightening me about Vedder's interest in reggae music.
Posted by Marco On The Bass at 12:58 PM