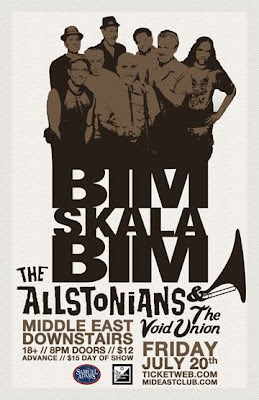 Iconic American ska band Bim Skala Bim are reuniting for their annual set of summer shows across New England, including a stop at the Middle East in Boston. The line-up will include original members Jim Jones, Mark Ferranti, Vinny Nobile, Rick Barry, Jim Arhelger, and Dan Vitale. John Cameron, Jackie Starr and other special guests including Dana Colley, saxophonist with the band Morphine, will make appearances at most of the shows.

While the band has tended to play these summer reunion shows close to their old stomping grounds, the good news is that The Middle East Show will be webcast on WBCN online for anyone around the world who would like to listen.  The show kicks off live at 10 pm EST on Friday July 20th.

I have three requests for the webcast show:  "I Took A Fall," "Solitary Confinement" and "Jah Laundromat."

Got my tickets for the Middle East show, totally psyched. Hopefully with Jackie Starr out with them they'll play lots of material from Tuba City.

First time i saw them was in summer 89 in a VFW hall in Syracuse NY opening for Bad Manners. Last Time I saw them was at the London Ska Fest last year. Great both times, and all times in between.