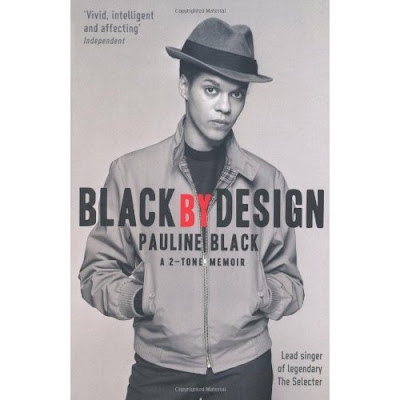 Good news for fans of e-books and Amazon.com! Pauline Black's excellent 2-Tone autobiography "Black By Design" is finally available for Kindle's in the U.S. for just $9.99!  As an added bonus, the Kindle version and paperback version include a brand new additional chapter- 'Raisin In the Sun- Women Don't Resign'.

While the book provides a insiders view of the birth of The Selecter and 2-Tone in Coventry, its really more a tome about the search for identity. The book pulls no punches when it comes to painting a picture of the trials and tribulations Black faced as the adopted bi-racial child of white parents living in the suburbs of London. More importantly, it examines issues of racial identity during a time that the U.K. was struggling to confront its own racism and the challenges of assimilating Black and Asian immigrants into British society and culture.

I asked Black about the process of writing her book during an interview I conducted with her two summers ago. Here is what she shared with me about the difficult questions and topics related to race and identity that she explores:


I have been writing short stories and opinion pieces for BBC Radio 4 in the UK for years, since the early 90’s. I also wrote a novel in the mid 90’s “The Goldfinches” which picked up publishing interest, but then the recession hit and money was scarce and the interest evaporated. Therefore I did not approach my book as a novice. I knew that I wanted to write my own memoir. When a “ghost writer” is used it is usually obvious. The main difference between my first outing into the book world and now, is that I got a literary agent. Without a literary agent it is almost impossible these days for a writer to be taken seriously by publishers. Publishing interest in my memoir was there from the beginning, largely because I was the only female among the bands that did the legendary “2-tone tour” in 1979 and also because I have extended my repertoire over the past 30 years to include, acting, presenting, radio broadcasting & writing, while still remaining active as a musician throughout the 90’s and Noughties. Therefore my story covered a wider brief. I didn’t want my memoir to be just about the brief period of the 2-tone years. Fortunately my literary agent and publisher agreed with my approach. For the book to have been signed by influential, maverick publisher “Serpent’s Tail” is very much a dream come true. They have a great publishing history reflecting many of the books that have influenced me throughout my life, most notably many of the “Harlem Renaissance” writers like Langston Hughes and Nella Larsen.

Primarily, “Black By Design” is about my search for my cultural and racial heritage, which, I discovered, had surprisingly original beginnings. It vigorously discusses the twin evils of “racism” and “sexism”, which gave me the motivation to join a 2-tone band in 1979 and enter the ongoing musical polemic offered by that inclusion.

I wanted my book to be “ideas driven”, to ask some difficult questions about what it meant to grow up black in a predominantly racist Britain in the 50’s and 60’s and how being adopted into a white working class family influenced my decision to choose music as a career path. I didn’t want to write some dishonest potted history of my private life or just a scrupulously kept diary. Hopefully I have achieved my goal.

I highly recommend the book.  It really is a must read!
Posted by Marco On The Bass at 10:01 PM