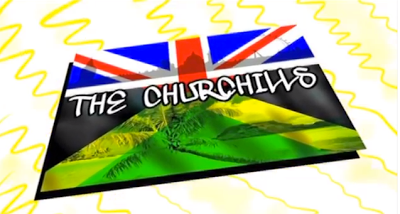 What happens when you transform The Griffins from animated smash, "The Family Guy" into an Anglo-Jamaican family living in London featuring a ska and reggae soundtrack and a theme song by legendary trombonist Rico Rodrigues? You get The Churchills!

The idea for the show is based on a concept developed by Keith Finch (an original 60's skinhead, musician and a member of The Dance Brigade with Lee Thompson of Madness) who manages the music company JA-13 and Othman Mukhlis of Jamdown Records.  Though still in the very early stages of creative development, the recrption to the concept has taken Finch and his partners by surprise.  According to Finch,  the feedback to the trailer has been "amazing!" despite the fact that he and the team behind the show are still in the process of fleshing out the backstory and script.

Supporting characters include Caribney, a white deadlocked rasta, the dearly departed Uncle Gladstone, a 'windrush' passenger, who as a ghost, provides context for the Black British experience and will take viewers through flashbacks to the 1950's and 1960's when he lived in Notting Hill, and  played bass on Trojan Records recording sessions. Other characters include Jimmy, the local wide boy who runs the hospital social club (voiced by Lee Thompson of Madness) and neighborhood canines Rio (voiced by Mickey Biggs) and Teddy, who are up to date with the latest technology.

The plan is also to include plenty of guests from the world of reggae and to feature a ska or reggae song in every episode.

Watch the trailer below: