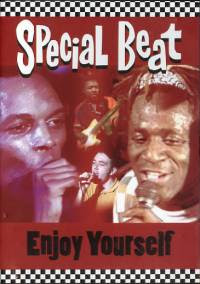 While anticipation builds for The Specials 30th reunion, its worth looking back at previous 'reunions' of members of various 2-Tone bands since the demise of the label. The first reunion/collaboration of real merit dubbed Special Beat, occurred in 1990. Constructed from the ashes of The Specials and The Beat the band was headed by Beat toaster, Ranking Roger and the core of The Specials including Neville Staple, Lynval Golding John Bradbury and Horace Panter as well as Finny from The Loafers who played the role of Terry Hall. This original version of the band toured the U.S. extensively in 1990 and 1991 and produced two live albums. Indeed, Special Beat can be credited with helping to nudge the U.S. into its own full-blown 2-Tone delirium in the 1990's.

Below are two video segments of the band. The first features a studio performance of 'Ranking Full Stop' interspersed with interviews of Ranking Roger, Neville and Finny about the genesis of the band and the second includes interview footage with Ranking Roger, Neville, Finny, John Bradbury and Horace Panter. Of note is footage of the band recording 'Rainy Days' which ultimately ended up on the third and final General Public album "Rub It Better" released in 1995

While all the 2-Tone bands toured the U.S. during the height of their popularity in the late 70's and early 80's, most had split up or called it quits just as they were beginning to make inroads (read Horace Panter's book "Ska'd For Life" for some great stories of The Special's U.S. tours). But those early tours had an effect and impact by spawning legions of young musicians around the U.S. to start their own bands and scenes. Though it took the U.S. a bit longer to have its own love affair with 2-Tone and ska, by the mid to late 80's, there were ska bands and thriving ska scenes in Boston, New York, Philadelphia, Washington, DC, Chicago and Los Angeles. Ironically, members of Special Beat, who had helped to set the stage for a revival of ska in the U.S., returned as conquering heroes playing sold out shows across the country. For most U.S.fans, the Special Beat tour of 1990-91 was the first time many of them had heard songs by The Beat and The Specials performed live.

Below is a segment on Special Beat from the UK music television program 'Rapido' which reported from their first show in New York in December 1990 about the impact the band's tour was having on fanning the flames of ska frenzy in the U.S. Rapido was a BBC2 television show which ran from 1988 to 1992 in over 14 countries and was presented by Antoine de Caunes. The show featured reports from up and coming new bands linked together with footage of Antoine standing in front of a large Rapido sign on a white background. Aside from its coverage of a variety of popular bands and musical acts of the time, it was notable for the immaculately dressed presenter, who brought with him a flirtatious Gallic charm, a flip, slightly smug sense of humor and an appropriately rapid delivery - in an accent so excessively French that many viewers simply refused to believe that he really was French.

Of special note in the clip above is the inclusion of my band Bigger Thomas. We were the support act (along with The Toasters) for the New York show and we were included in the 'Rapido' segment about the band's triumphant U.S. return. Indeed, yours truly is interviewed along with my bandmate Roger Apollon, the singer for Bigger Thomas, about why ska has finally exploded in the U.S. There is also a bit of footage of my band performing (I can't believe how young Roger and I look in the interview!) The show at The Ritz in New York was the highpoint of our relatively young career at the time and it was one of the largest audiences we had ever played for. The show helped to expand our name recognition in and outside of New York and when we opened another show for Special Beat later in 1991, Horace Panter walked right up to me and complimented me on my interview in the Rapido segment. To this day, that remains one of my most prized memories of playing in the band.

Interestingly, Special Beat have risen again and will tour Australia in April of this year right before The Specials reunion tour of the UK. The band will feature Neville, Ranking Roger and special guest Pauline Black from The Selecter.

Dates for the Aussie tour are: 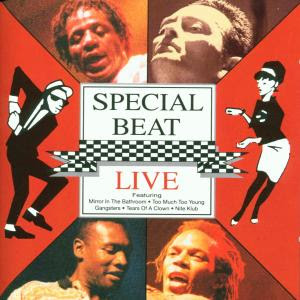 Below is a download of "Special Beat Live" featuring live performances of the best of The Specials and The Beat. This set is also the one the band performed at The Ritz in 1990. I still have the set list as a treasured souvenir.

Special Beat - Live
Posted by Marco On The Bass at 7:15 PM

One thing I would interested to hear, if someone could track it down, is the Special Beat studio album. I know someone (Sean Flowerdew, I think) was selling copies of it on cassette for a very short time. They were all gone by the time I got money to him. I remember that one of the tracks on it was "Rainy Days". I'm sure Kevin Flowerdew would know something about it, and would likely have a copy.

Great post! I was looking through old ticket stubs and came across one from this tour. Do you by any chance know who they toured with in the states? I got the change to see them at the Warfield in San Francisco.