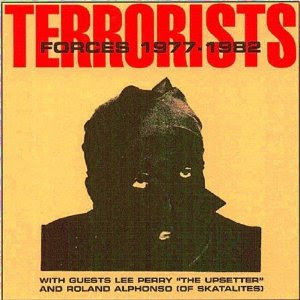 Perhaps one of the most influential and overlooked U.S. ska/reggae bands of the late 70's and early 80's was the New York City-based band Terrorists. While Los Angeles of the early 80's was enjoying a full-blown mod/ska explosion that propelled The Untouchables straight to London and a recording contract with Stiff Records, a very different kind of music scene was brewing in bars and clubs around New York City. This scene helped to produce many iconic rock bands including The Ramones, The New York Dolls, Talking Heads, Patti Smith, Suicide and others. It also nurtured and supported Terrorists who were playing a unique blend of reggae, ska, dub and punk a full two years before 2-Tone officially kicked off a punky reggae party in the UK. 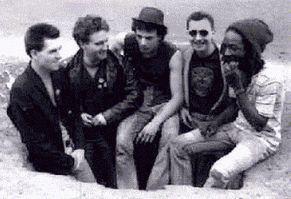 The band was formed by a group of white New York City kids who were punk, ska, dub and reggae freaks, at the same time that Bob Marley & The Wailers released "Exodus" and helped launch the whole punk and reggae love affair in the U.K. Begun in October 1977 by drummer Dro (David Ostrowe), bassist Gary Schiess (a/k/a DB), singer and guitarist Ray De Angel and keyboardist Frank Covello, the band quickly became a mainstay of the New York music scene. They shared the stage with well known artists including Talking Heads, Patti Smith, Brian Setzer (of Stray Cats), Johnny Thunders, and Sylvain Sylvain (of The NY Dolls and The Heartbreakers), The Selecter, Lee Alan Vega (of Suicide), The Fast, Joe Bowie (of Defunkt), Lester (Almost Famous) Bangs, and many, many more. Their propulsive brand of punky reggae filled the dance floor at clubs throughout New York City including Max's Kansas City, CBGB's, Irving Plaza, Hotel Diplomat, Hurrah's, The Ritz, The 80's Club, The Rat, Peppermint Lounge, Electric Circus, Trax, Tramps and many others. 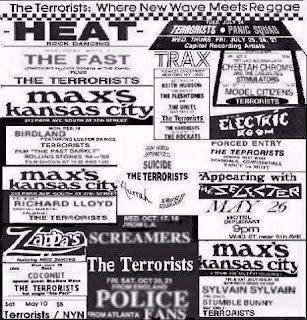 The Terrorists' were directly inspired by and committed to playing traditional Jamaican ska, reggae, and dub and their adherence and ease with the genre soon caught the attention of superstar dub producer Lee "Scratch" Perry. This was during a time when Perry had parted company with his Jamaican house band The Upsetters and was traveling widely, forging musical partnerships wherever he went. His work with the Terrorists was one of the first of these partnerships. The band played live with Perry during his time in America in the early 1980s, and two studio recordings captured their brief collaboration: "Love Is Better Now" and "Guerilla Priest". The former is a love song with Scratch in the producer's chair, while the latter is a typical early '80s ranter with Scratch on vocals.

The band also worked extensively with Rolando Alphonso of the legendary ska institution The Skatalites who recorded and performed live with the band and added further credibility to their reggae and ska chops. Terrorists drummer Dro recalls the meeting with Alphonso that lead to his joining the band (Sidenote: Alphonso had suffered a stroke in 1975 that left him unable to play saxophone. He had to re-learn new ways to play his instrument and it was during this time that he agreed to join the band): During these years Roland would often be present at rehearsals of his son Noel's band, Outer Limits. It was at one of those rehearsals, at Matrix Studios on West 27th [New York City] in the spring of '75, that David "Dro" Ostrowe first met Rolando. "He had his old Selmer tenor that never got polished in its case. Roland was just sitting there watching, but he never played with them, at least when I was watching", Dro recalls. That was probably because the stroke had left Roland with limited dexterity in his right hand, and it took him time to develop new techniques that would enable him to play the music the way he had before.

As Dro elaborates, "It was a couple of years later that I saw him come onstage with Noel's band Jah Malla, and he blew a tune. Nobody seemed to know who he was and when he left no one seemed the wiser. So I approached him and asked if he would play with my band, Terrorists. I told him we could provide a proper stage for him. He said yes, and we planned it for Max's Kansas City. By spring of 1979 we were ready to do them. We'd play our set, and then bring on Roland as the headliner to blow his own set of tunes. We worked with him for about two years, even playing a show for Ron Delsner in The Diplomat Hotel's Main Ballroom. It went great, Roland was in good spirits, and blowing really well. Terrorists played shows with him through '79 into 1980, and by the end of the year his name was properly established in New York and he had developed a following." Dro notes that, "we did some recordings with Roland that Max's Kansas City backed, the aborted Sax Scandal album."


Sadly, Dro passed away in October 2002. He was well known in New York City reggae circles and had a very popular reggae radio show on WBAI-FM. His legacy and the legacy of Terrorists lives on in the generations of New York and New Jersey ska and reggae bands who began to build one of the most vibrant U.S. ska scenes of the mid-80's through the early 90's. Below is a download of a sample of a few tracks ('Hail The Day', 'Guerilla Priest' featuring Lee Perry and 'Christine Keeler' with Roland Alphonso) that are included on their long play release "Forces: 1977-1982" (originally released only on cassette on ROIR in the 80's) which features all 17 tracks the band ever recorded.

Terrorists - Sampler
Posted by Marco On The Bass at 2:03 PM

DAM! I was working on a post about this band but you beat me to it! I tell everyone about these cats and regularly spin their Lee Perry cuts when I DJ. One of my favorite lost gems.

Mind if I use that photo on my blog to link to this post and expand on it a bit?

Seriously everyone should know about this band! Another good post man.

My 1st post. Cheers. Top Site fella. In appreciation i found the full Terrorists album.I hope you enjoy as much as i've enjoyed your site.

I'm a bit late on this post but its nice to see my old friend Dro mentioned along with his old band. I did a post on my blog today about Max's Kansas City and it mentions the Terrorists. I linked to your story. Good work. Dro RIP.

It's so sad to lose touch with people. I worked with the Terrorists as their roadie and friend for many of the shows mentioned. It's sad to just learn of Dro's passing. Gary also passed away many years ago. John Collins is still active and works with a band called the Hudson Dusters with Wild Bill Thompson of the Senders. These guys were steeped in the riddems. Between them and Benji, another rip, who worked for Marley as his bodyguard, I knew it then, but I'm incredibly fortunate to have been inside this musical bubble at that time, especially for this young white kid. I thought that's how things always were and would be. Peace, BeBop@Fastmail.fm NYC

I am going through my old record collection (2 huge boxes) and I found my record of "Terrorists - and Lee "Scratch" Perry (81). Wow I haven't pulled this out in years.

I am going through my old records tonight. Found my album of Terrorists with lee "scratch" perry. Wow,,,so many years ago. I still remember when I bought this album new.

The song "Fences" by Kozminot from 2000 is most likely the last recorded track that Dro from The Terrorist played drums on. Dro came to the "Out by the Tree Studio" in "Music Building" in mid town Manhattan in 2000 to record this track.

The Terrorists recordings I produced for max's kansas city were never released because the owner lost his mind while dancing with the White Lady.

My ex-husband Norval Thompson played with them for a bit when we were living in the Bronx in the late 1970's. He is the black man in the picture in the far right. They used to rehearse in our apartment, a ground floor of a row house. They did a Tuesday night gig open night at CBGBs (did not get paid). Patti Smith was there and took the stage and sang "You light up my life" I think it was her birthday. I really liked their music, but Norval did not stay with the group for that long.