Madstock 2009: The Sun and The Rain & The Return Of Jerry Dammers 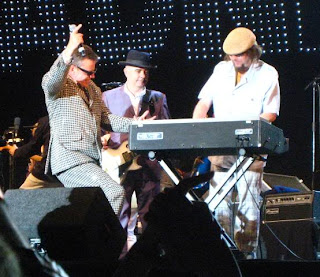 Despite unseasonable weather for summer that may have dampened the spirits of most bands, Madness performed a jubilant set in windy conditions for a happy crowd of fans attending Madstock in Victoria Park in London this past weekend.  The band were joined by Rhoda Dakkar (who sang of the 'On The Town') and Jerry Dammers (whose Spatial AKA Orchestra were added to the Madstock bill) who joined them for rousing versions of 'Night Boat To Cairo' and 'One Step Beyond'. For those unable to attend the show, the band have made the whole Madstock set available for sale on a 'Nutty Sound Concert Stick. More purchase information is available here.
According to fans in attendance, it was the hordes of organized pickpockets rather than the rain and wind which made the show a difficult experience. The UK seems to have been hit by an epidemic of pickpockets at outdoor shows who make the most of their opportunity to strike while fans are swept up in a dancing frenzy.
Of interest to fans of 2-Tone and The Specials was Dammers first return to the stage following The Specials reunion, with his Sun Ra inspired orchestra who played a very jazzy version of 'Ghost Town'.  Watch and listen to what The Specials may have sounded like if Dammers had returned to the fold:

Finally, following in the footsteps of the Beastie Boys who made a concert film with fan generated video a few years ago, Madness have asked fans who attended Madstock to send them any footage for possible inclusion in 'Madstock The Movie".  According to the band, "If you have a Video Camera (or a decent Video Camera on your Phone) Your footage could be immortalised in the Madstock Live Film! Submit the clips of your Madstock day, if it gets included in the final edit, you’ll also be listed in the film credits as Camera Crew!" Click here for more info.
Posted by Marco On The Bass at 10:23 AM

Hi Marco, Keep up this excellent blog. What a weekend this has been. Madstock was great. Took my son, but he's 17 and still wrapped up in how serious he has to take life, unlike his dad who's dancing made him laugh until he was sick. Didn't notice any rain though, it was sunny where i was standing. And i shook the Generals' hand. Then Saturday, Neville Staple, Pauline Black and The Beat put on a dream show, pure heaven. Thank You. Now send in a doctor, these feet are killing me.

Thanks Captain! Wish I could have been there to see Jerry Dammers up on stage with Madness. Glad to hear the weather was sunny where you were standing. Reviews of the show all mention the windy and cold conditions.

Great post! You can see my video of Jerry and Rhoda performing 'Madness' with Madness and Rhoda doing 'On The Town' via the fan tv page:

Ps Jerry performed 'Madness' and 'Night Boat To Cairo' with them. Not 'One Step Beyond' (which I was glad of as I'd just missed his set!)

...oh and the rain stayed off when Madness were on but it rained during The Blockheads and The Pogues