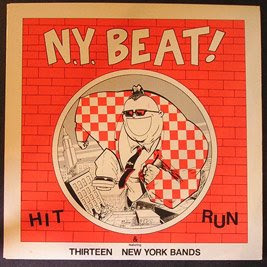 This past Friday night saw the closing of yet another venerable club here in New York City. The Knitting Factory joined CBGB's, The Continental and many others that helped to grow, nurture and support the NYC ska scene over the last 25 years. The Knit (as it was affectionately known) regularly booked ska bands and ska shows during its 20 year run in Manhattan and was host to numerous '3 Floors Of Ska' shows which took advantage of the stages on the three different floors of the club to hold what amounted to a giant ska festival under one roof. Given its support over the years, it was no surprise that the club decided that its last show ever in Manhattan would be a ska show (the club is moving to a new location in Williamsburg, Brooklyn.) 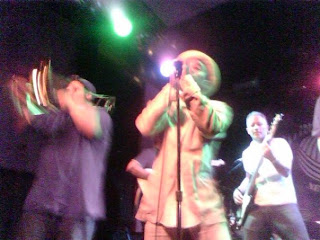 My band was invited to play the last show and I was grateful to have one last time to perform on the main stage and to walk around the club's unique nooks and crannies. Even better was the turnout of NYC ska band members and fans who came to dance and celebrate at The Knit one last time. Even Rob 'Bucket' Hingley of The Toasters was on hand, along with many old NYC ska fans from back in the day who reminisced about the good old days and discussed the current state of NYC and American ska. With so many people on hand who remembered the early days of the NYC ska scene, discussion turned to all the old bands who were there in the beginning and the first compilation record that really helped to put NYC ska on the map but also to sow the seeds of 3rd wave ska in the U.S.

The 1985 compilation 'NY Beat: Hit and Run' was the very first compilation of U.S. ska ever. Released by Moon Records, it neatly captures the very beginning of the New York ska scene. While the music here is more influenced by the British 2-Tone movement than the later bands that would drive the third-wave revival, its a diverse mix of ska, reggae, pop, punk, rock and soul. Artists included are the A-Kings, Beat Brigade, The Boilers, City Beat, Cryin' Out Loud, The Daybreakers, Floorkiss, The Press, The Scene, Second Step, The Toasters and Urban Blight.

The original issue of the comp was celebrated with a big show at Danceteria (the Knitting Factory of its day and age) featuring all the major bands who were part of the NYC ska scene at the time. In many ways it was the high point for the NYC ska scene which really exploded both in the New York City area and outside the northeast, particularly in California. I was at the show, and it inspired me to pick up the bass guitar and start my own ska band. 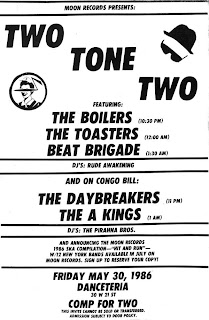 There were plans to re-issue the comp about 10 years ago but they were scuttled because it was impossible to locate many of the artists on the record who had disappeared or were untraceable to get their permission. That said, the record is nearly impossible to find and its unlikely that it will ever be re-issued. If you can find an original copy on vinyl, then you should consider buying it. Standout tracks include The Boilers soulful 'Brighter Days' which was recorded specifically for this comp as well as 'Opportunity' by Second Step, Armageddon Beat by Beat Brigade and the catchy pop/funk ska of 'Escape From Reality' by Urban Blight. The comp also featured the first recorded toasting of one Jeff Baker (AKA King Django) on the Too True track 'Free South Africa'.

Track listing:
Matt Davis - The Toasters
Why is the Boat so Small - Floor Kiss
Free South Africa - Too True
Brighter Days - The Boilers
Shocker - The Toasters
Opportunity - Second Step
Escape From Reality - Urban Blight
Just Another Warning - The Press
Walking - The Scene
Preying Man - The Daybreakers
It`s Not Up To You - City Beat
The Distance - Cryin`Out Loud
7259 - The A-Kings
Armageddon Beat - Beat Brigade
Posted by Marco On The Bass at 4:24 PM

Thanks Marco...
That is some real ska news

This album brings back memories, I picked it up in Dublin around 1988 and at the time was amazed to see there were that many bands playing ska in New York. In those days there was of course no internet to find out what was going on ouside Ireland and Britain. You generally just came across gems like this at your local record shop which, I think, added to the excitement value of it all. Great tracks here from Too True and The Boilers in particular

Marco- I've been searching for a copy of this ever since Breaking and Entering came out.

Remember when these "skamipilation" records were the center of the scene?

Holy shit! This blog is exactly what I've been looking for. Grew up in Albany and had to travel down to NYC to even get a glimpse of this music.

Skampilation was essentially our link to where the scene was happening. If anyone has Oi! Skampilation 2: Skalloween or "Hit and Run: Breaking and Entering, upload them and you will be my god.

i've finally found this album after years of looking without knowing the name. someone gave me an unlabeled tape of it in 1988-89, back in bklyn. i need this album. failure is not an option. only on wax? only on ebay? are there any other options?

HI Mick. There are options. Feel free to contact me via my e-mail address on the blog and I can tell you more.

need this album...been looking for years. can you help? thanks!

Hi Matthew and Emily! There are options. Feel free to contact me via my e-mail address on the blog and I can tell you more.

Marco,
I was just re-listening to this and was blown away by the Too True track. You have any information on them? Are there any other recordings by them out there?