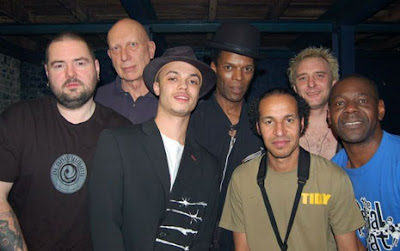 The U.K.'s summer of ska marches on. The Specials played Glastonbury over the weekend and Madness are gearing up for Madstock in mid-July (which will also include Jerry Dammer's Spatial AKA Arkestra on the bill). There are even rumors that some members of The Selecter may play shows at some point in 2009 to mark their 30th anniversary.
One band that has been out of the 30th anniversary spotlight of late, but who played a very significant role in the launch of 2-Tone in 1979 is The Beat. Part of the reason may be the cold war between former co-frontmen Dave Wakeling and Ranking Roger. Sadly it would seem that both are intent on doing their own thing and that a reunion remains unlikely. Each leads his own separate band with Wakeling based in the U.S. and Ranking Roger in the U.K. and E.U. While Wakeling's version of The English Beat are getting ready to kick-off a cross country summer tour of the U.S. with Reel Big Fish, Ranking Roger's version of The Beat have also been very busy of late. The band, who are in the midst of a lengthy U.K. tour are rumored to be wrapping up a new album that is being mixed by Adrian Sherwood.
Below is a recent video interview and live footage of Ranking Roger's version of The Beat playing a sold out show at the 100 Club in London:

I had the good luck to meet and chat with both Dave Wakeling and Ranking Roger. My band played support to Wakeling's English Beat a number of times over the last few years and we opened a few times for Special Beat with Ranking Roger when they toured the U.S. in 1990 and 1991. Both of them are wonderfully down-to-earth and approachable. The first time I met Ranking Roger my band mates and I were sitting in a dilapidated closet sized hole in the wall of a dressing room when there was a knock at the door. We opened it and there was Ranking Roger! He came in to talk with us for a bit and wished us luck with our set.

Of particular interest to fans of both versions of The Beat is that Ranking Roger's band just recorded a live radio session and interview with Mark Lamarr on his BBC 2 show 'God's Jukebox' which included three new songs and a very entertaining interview with Roger, his son and members of the band including Mickey Billingham and original drummer Everett Moreton. The session and interview were recorded on June 16th and aired over this past weekend. For fans outside the UK who have not had a chance to see or hear The Beat, the songs are quite good particularly 'Dangerous' which has a nice laid back reggae groove and 'One Pretty Woman' which features Ranking Junior on lead vocals and has a more contemporary reggae sound. You can download the show below:

Also, as a bonus here is the demo of The Beat's 'How Do You Do' recorded a few years ago. The song starts out sounding a bit like a song by The Police and then kicks into straight ahead 2-Tone ska with a nice sax riff and melody.

The Beat - How Do You Do
Thanks to Liam at Liam_Ska's Heavy Heavy Monster Blog for the original link to the downloads. Judge Fredd at The Beef, The Original and The Cover also has a great post up about Roger and his band. Check it out here.
Posted by Marco On The Bass at 7:13 AM

that was awesome Marco