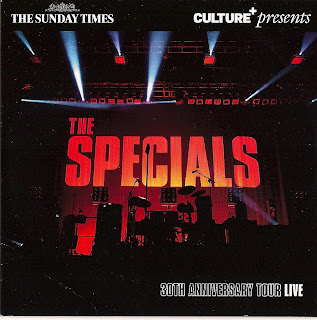 Sellout or fan appreciation? Whatever you may think of the free CD available in today's Sunday Times of London newspaper (which is owned by Rupert Murdoch), the giveaway of The Specials triumphant live performance at the Brixton Academy in May is a novel way for the band to stay in the public eye and to help promote the remaining slate of summer festival shows and the second leg of its UK tour this fall. Its also a way for The Times, which is struggling like all newspapers are these days, to improve its sagging circulation. The CD giveaway is accompanied by a long article on the band with interviews with all key members.

The debate over the CD giveaway seems to fall along the same political faultlines as those surrounding the band's reunion in the first place. The legion of fans who are ecstatic over the reunion as evidenced on the band's fan forum are happy to have a memento of the occasion. Supporters of Jerry Dammers, who continues to remain on the outs with the band, have criticised the giveaway and the band's deal with Rupert Murdoch and the right-leaning Times as a political misfire for a band born as a reaction to the Thatcher regime in the UK.

The giveaway has garnered major publicity around the UK. Its importance to The Times is clear in the publicity it has spent on the promotion. Here is the TV commercial that is running in the UK to promote the giveaway.

Below is the track list for the CD giveaway including the descriptions for each track provided by The Times:

Do the Dog
The band’s opening song sets forth their punk-ska fusion and anti-racist manifesto.

Dawning of a New Era
The Specials changed the face of music with the 2-Tone revolution, and on this song Terry Hall staked his claim as the voice of disaffected youth.

Gangsters
A homage to the ska great Prince Buster, this debut single put them on the map.

Rat Race
A sneering attack on the complacency and political posturing of affluent students.

Monkey Man
Dedicated "to all the bouncers", this is a storming version of Toots and the Maytals’ ska/reggae anthem.

Blank Expression
Hall’s dissolute vocal reflects the vacant expressions of the people he meets on an edgy walk through Coventry.

Friday Night, Saturday Morning
The false hopes of living for the weekend, working all week for it and staggering home disappointed.

A Message to You Rudy
Dandy Livingstone’s rocksteady favourite reaches a new audience, borne along on the fabulous interplay of trombone and trumpet.

Do Nothing
An achingly sweet melody listlessly recounts the gloom of the new Thatcher era.

Nite Klub
A sneering attack on scenesters, or whatever they were called back in 1979.

Too Much Too Young
Who could have predicted that you could top the charts with a vicious anthem about teenage pregnancies?


For those of you living outside the UK who are unable to get a copy of today's paper, below is a link to download the tracks along with the free download of 'Too Hot' that is now available on iTunes.

That's gr8 news, man.
Did you see the headline at www.ska4u.com ?
Skank on bro

dunno about the Murdoch paper..

hooray, thanks for sharing!!!