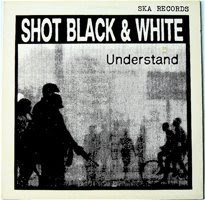 Though it may have been short-lived, Britain's Ska Records (a sideline to its more popular cousin Oi Records) deserves credit for releasing albums by U.S. ska bands of the late 1980's. Label founder, Roddy Moreno, is a well known figure in the global skinhead community and led The Oppressed (a well-known Oi band) and The Rude Boys (a ska band) from Cardiff, Wales. While living in New York City, Moreno helped establish the Skinheads Against Racial Prejudice (SHARP) movement in response to the growing number of racist skinhead attempts to hijack both the image and culture of ska loving skinheads.
The majority of the releases on the label stem from Moreno's time living in New York City in the late 1980's with all but one band (his own) being American. His goal (as part of a deal with Rob Hingley of The Toasters and Moon Records) appears to have been to bring the new third wave ska sounds blaring from the U.S. across the ocean and to expose them to the British ska market. All of the releases on the label received very small pressings and have become very difficult to find, particularly here in the United States where they were often sold as imports. Some of the records never got released by a domestic label here in the U.S. thus becoming collectors items. The label is probably best known for issuing the Skaville USA series of compilations which offer a great time capsule of early third wave ska here in the U.S.. Of note are the Boilers hard to find 'Rockin' Steady', Gangster Fun's 'Come See, Come Ska' and The New York Citizens 'Pounding The Pavement' as well as seminal releases by Bim Skala Bim.

Of particular interest to me is the release by Shot Black & White. The band were unique because they were one of the few who added a healthy dose of rock and roll to their progressive rock/ska hybrid. While they were initially part of the NYC ska scene of the mid 80's playing shows with the other core bands of the scene (they were originally known as The Daybreakers and had a track 'Preying Man' on the N.Y. Beat:Hit & Run compilation), they set out to blaze their own trails outside the NYC ska scene playing shows with non-ska bands.
I first encountered Shot Black & White in 1987 when a band I was in competed against them in a battle of the bands competition at the Green Parrot club at the New Jersey shore which they won (my band Bigger Thomas won the contest the following year). First prize was 40 hours of free recording time which Shot Black & White used to record the album 'Understand' which to the best of my knowledge was only released and distributed on Ska Records.

Of all the Ska Records releases, Shot Black & White's remains one of the most obscure and difficult to find and there is little to no information available about the band. What I do recall is a band that had a great look with a high energy stage show and a very theatrical front man known only as Tome. The band's bass player Winston Roye has become a professional musician here in New York who has performed with Jewel, Lauren Hill, John Doe of X, Ace Of Base and is now playing with American Idol finalist and Broadway star Constantine Maroulis.
Shot Black & White
Bass - Winston Roye
Drums - Joe Mattis
Guitar - Michael Schwartz
Guitar, Harmonica - Joshua Simon
Vocals - Tomé

Below is the track list and download for the band's only release 'Understand'. The album is notable for fairly obscure lyrics (similar in tone to The Reluctant Stereotypes who recorded in the late 70's) but is a refreshing rock/reggae combination in the vein of the first General Public album with some smoking lead guitar and harmonica playing and very smooth backing vocals.
Track list:
Day in Day out
End Of Days
Far Off
Freedom
I Believe
Man Look Around
Put Down The Arms
Underprivileged Race
Understand
Win Instantly

Shot Black & White - Understand
Posted by Marco On The Bass at 12:42 PM

Thanks for the detail on this band, I would have had no idea they were previously The Daybreakers. I first heard them on Max The Dog says... compilation from George Marshall, which led me to it.

Anyway, 'Understand' also got released on CD in this country in 1988, a NYC label Conflict Records CON2002/ CON2000 (address looks like some dude's apartment - the matrix # differs depending on which spine you look at.) Not a lot of notes, just lyrics, and oh that awesomely dramatic cover photo!

Thanks John. I never knew that this record was released on CD here in the US. I have the vinyl from Ska Records. There is amazingly little info about them online>

I recently came accross your blog and have been reading along. I thought I would leave my first comment. I dont know what to say except that I have enjoyed reading. Nice blog. I will keep visiting this blog very often.

Hi .I'm Paulie . After Understand was done , Mikey ,Josh and Tome came out to San Diego without Joe or their previous drummer Alex. I became friends with mikey as a fellow musician and we had a mutual friend. long story short, we went into the studio and recorded 3 songs . "Hey You: , "Look around" and "Rebuild". This was 1989 ...Mikey made a video for "Hey You " which was really cool . We played Shot Black & Whites FINAL show at Tramps in NYC around Thanksgiving of 1989. .... Mikey and I formed Hyper Kowtow ( an alt punk thing) after that and played for about a year and put out" Militant City" 3 song vinyl in 1990.

Hi .I'm Paulie . After Understand was done , Mikey ,Josh and Tome came out to San Diego without Joe or their previous drummer Alex. I became friends with mikey as a fellow musician and we had a mutual friend. long story short, we went into the studio and recorded 3 songs . "Hey You: , "Look around" and "Rebuild". This was 1989 ...Mikey made a video for "Hey You " which was really cool . We played Shot Black & Whites FINAL show at Tramps in NYC around Thanksgiving of 1989. .... Mikey and I formed Hyper Kowtow ( an alt punk thing) after that and played for about a year and put out" Militant City" 3 song vinyl in 1990.