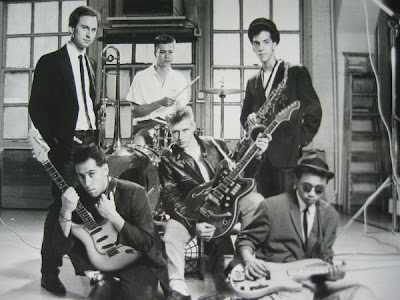 As part of my ongoing quest to document the origins of the NYC ska scene of the early and mid-80's I am profiling key musicians and bands who played an important part of giving birth to one of the most vibrant ska scenes in the U.S. One of those musicians was Carmelo DiBartolo who founded Beat Brigade and was a constant in the band as it morphed from a 2-Tone influenced ska band to a latin/funk band it later incarnations.
However it was the early version of the band featuring DiBartolo and his bandmates Jack Hoppenstand (guitar), Andrey Frolov (drums), Frank Usamanont (bass), Nelson Rivera (sax) and Eric Storckman (trombone) that were a mainstay of the early NYC ska scene and ska shows. The band's diversity reflected the diversity of New York itself and their Clash and English Beat-inspired sounds (with a dose of Elvis Costello on top) was fresh and energetic.
While the original band went its separate ways before it could really fulfill its potential, I'm happy to report that a good number of the original band members are currently rehearsing with a goal of playing a reunion show in the New York City area this fall. Keep your eyes open for a reunion show announcement here.
Carmelo took time out to conduct an interview with me:

What was it like growing up in New York City in the early 80's?
Really a fun place to be ....Still gritty (post Giuliani,) Lots of options...both lifestyle and music.... You could go to a disco one night, the Reggae Lounge the next, and Play at Cb's the next...no pre-dispositions, no pigeon holes everyone was pretty cool (or at least that's what i remember)

When did you first get into music? Do you remember the first record you ever bought? Who introduced you to ska and reggae?
My first record was KISS Alive...great stuff ! My next record was Give'em Enough Rope....then Marley and Tosh. I learned to play on a plastic guitar with nylon strings....My voice was always my strongest asset...but i've become a "not so bad guitarist"

When did you discover that you could sing and play guitar? Were you in any other bands before Beat Brigade?
I started singing before i played the guitar, and started singing with whatever i learned.... and started writing immediately....pretty lame stuff... but then again i was 16 !

How did Beat Brigade get started? Where did you meet your band mates?
Ad in the Voice ! (how's that for New York Rock and Roll)...I went to audition with Jack and Andy...then we found Frank. Later Nelson, then Eric and Dave.

How would you describe the early sound of the band? Did you make a conscious decision to play ska and reggae? Dave Barry of The Toasters (who also played in Beat Brigade at one point) said that the Beat Brigade brought a lot of The Clash/ Elvis Costello/ English Beat to the table.
We were heavily influenced by many bands (The Smiths, The English Beat, The Jam (my fave), The Clash...plus we had all of the classic rock influences that no one ever admits to ...The Stones , Zep, The Beatles, ...the Who ! It's all there ! all in my mind.

Were you aware that there were other ska bands in NYC at the time? Had you seen or heard The Toasters or Urban Blight? What was the time line from the formation of the band to its first gig?
I heard about all of them as the movement progressed,then we all started playing together... and it was ...cool. Like the scenes that we all had read about... Historically ....Punk in London and New York. Ska in Jamaica., San Francisco in the 60's...we all new each other and enjoyed each other company..

What was the New York ska scene of the mid-80's like? I always got the impression that it was very tight knit scene.
Yes ...almost too much...but in retrospect I miss everyone and hope they are all well.

Can you share any unusual stories about any live shows that were particularly memorable? Did the band tour at all outside NYC?
My most memorable show was at Danceteria for the NY Beat album release...it was a happening. The most memorable tour was with the later incarnation of Beat Brigade ( Latin/ Soul/ Ska/ Reggae) when we were in the deep south with a multi racial band. We rocked !

Tell me about being part of the N.Y. Beat: Hit & Run compilation that Moon Records released in 1986. Was 'Armageddeon Beat' recorded for the compilation?
Being a part of such a memorable album is quite an honor ! I thank Bucket (Rob) for including us.... We had recorded it just for the Album ...bit it was a bit of a local anthem (props to Ski)

Tell me about recording the split 7" single "Talk is Cheap" b/w "Try and Try'. Were there plans to record more songs or an album?
We all wanted it to go on forever...we have quite a body of recorded work (check our myspace page) and it does not even scratch the surface of the later stuff (funk and latin)

Why did Beat Brigade break-up?
...the same reason that all bands do...we were young and idealistic about our music and all had a different vision of what we should sound like ...we needed a producer to tell us all to shut the fuck up and play, then maybe thing would have been different. I think that had it been a few years later ...the mainstream would have been more accepting of our music.

What have you been doing musically since Beat Brigade?
Yes ! A Moderately successful Rock/ Funk/ Reggae/ Ska band called Crispy Brown...We broke up in '96 but have since re-united for some show's (great players)

What are your lasting memories of performing with Beat Brigade and the NYC ska scene of the 80's?
It was for one brief shining moment, a cool, fun , young, musical, and wonderful thing to be part of...full of love, music, drink and laughter (Oh yeah and some great chiba )

Any chance of a Beat Brigade reunion?
BIG YES... I Miss those guys and that Music ! Bring it On !
You can read more about Beat Brigade at their MySpace Web site here.
Posted by Marco On The Bass at 12:17 PM