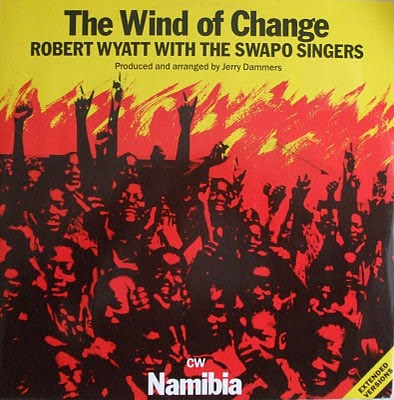 Though his band had broken up and he was in debt to Chrysalis Records, Jerry Dammers was on a hot streak in 1985. Right on the heels of producing and releasing the political pop of 'Nelson Mandela' which went to the top of the U.K. pop charts and raised awareness about Mandela's continued imprisonment, he next turned his sights and attention to the situation in the country right next door to South Africa: Namibia.

With The Special AKA in disarray and 2-Tone Records on its last legs, Dammers enlisted Robert Wyatt, the former drummer of The Soft Machine, a popular solo artist in the U.K, and a outspoken political activist and paired him with the SWAPO Singers. SWAPO (South West Africa People’s Organisation) was the national liberation movement of Namibia that was then at war with the Apartheid-led regime of South Africa. The single produced and arranged by Dammers was released on Rough Trade Records and musicians on the single included a who's who of 2-Tone musicians including Lynval Golding (rhythm guitar), Dick Cuthell (cornet), Annie Whitehead (trombone) and Jerry Dammers (piano, synths and guitar).

The pairing of Dammers and Wyatt was a match made in political pop heaven. Wyatt's solo work during the early 1980s was increasingly political, and he became a member of the Communist Party of Great Britain. In 1982, his interpretation of Elvis Costello's Falklands War-inspired song "Shipbuilding", the last in a series of political cover-versions, reached number 36 in the UK singles chart.

During an interview in The Mirror from 2008, Wyatt admitted to being a fan of The Specials, "I think the last time I felt really in tune with pop music was when The Specials were around. I used to love going to see them, such an exciting band.” Dammers confessed his admiration for Wyatt, stating. "What I like about Robert is that he comes from an era that wasn’t just about money. Discovering music was the important thing. He’s kept that spirit alive.” The single and its B-side 'Namibia' were recorded on August 30th 1985 at the Power Plant and released with a video that fall in the U.K. Twenty five years later the song sounds just as catchy and danceable as 'Nelson Mandela' and it features some great musicianship like Wyatt's smooth and steady vocals, a hall of fame worthy horn line courtesy of Dick Cuthell and subtleties like the way Annie Whithead's trombone line shadows Ernest Mothle's bass line on Dammer's brilliant arrangement. Many thanks to Liam Ska for posting the song on his blog and for inspiring me to tell a bit more about the story behind the song and its impact on helping to raise awareness about SWAPO and the situation in Namibia in the mid-80's.
Posted by Marco On The Bass at 3:24 PM

Ah, cool. My cousin has this single and we used to listen to it quite a bit back in '86-'87. I used to think it was Madness. I'll never forget the opening lines...

Pretty catchy song. Thanks for sharing!

Thanks Narvolicious! I remember hearing it on college radio back in 86-87 and never being able to find it. I only recently heard it again and was reminded what a great song it is.