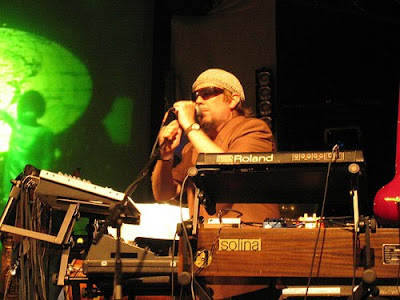 If 2009 was the year of The Specials triumphant reunion, then 2010 (or the month of March and April anyway) may will be the year of Jerry Dammers' Spatial A.K.A. Orchestra. The band has just launched a new, one-page Web site that lists all 18 band members and dates for an 11 date tour of the U.K. which is notable for not including a date in London.
The Web site also includes videos of four songs the orchestra performs including a magnificent take on a medley of 'Ghost Town' called 'Ghost Planet'. Have a look and listen below:

For the uninitiated, Dammers; orchestra is inspired by Jazz pioneer Sun-Ra's Arkestra down to the Egyptian costumes, theatrics and visuals, and a mix of ska, reggae, hip-hop, dub-step, rock and outer-spatial sounds - featuring a crew of leading jazz soloists - Larry Stabbins, Denys Baptiste, Finn Peters, Nathaniel Facey, Jason Yarde and Zoe Rahman amongst them - and the voices of Francine Luce, rap poet Anthony Joseph and dub poet Space Ape. The big band covers versions of some of Sun-Ra's songs as well as tracks by Alice Coltrane, Cedric Brooks, Moondog, The Batman Theme, and the occasional song by The Specials.
The Independent in the U.K. reviewed one of the Spatial's shows last year declaring, "Part of the justification surrounding Dammers' ban from the Specials reunion includes the fans' belief that he has sold out on his punk credentials. True, in playing a 15-minute-long free-jazz version of the Batman theme, Dammers has entirely broken the golden rule of his generation. But the simple fact that he has dared to do so is considerably more punk rock than the irrelevant nostalgia-fest the rest of The Specials will be laying on this summer. Jerry Dammers as a cosmic free-jazz progressive? How times change".
If we can't get The Specials over to the U.S. in 2010, here's to hoping Dammers' decides to give the States one more chance.
Posted by Marco On The Bass at 4:53 PM