I'm excited to announce a reunion to celebrate the release of the iconic ska compilation N.Y. Beat!: Hit & Run is confirmed for Saturday April 10, 2010 at 8 P.M. at the Dusk Lounge in New York City (owned by A-Kings/Thick As Thieves bass player Sid Reitzfeld). Members from almost all of the 13 bands featured on the album are expected to attend, and fans, family and friends are all welcome to join the festivities. The night will feature Steve Shafer (The Duff Guide To Ska) spinning all three waves of ska, reggae and rocksteady, lots of old pictures from back in the day and giveaways. It will be historical! 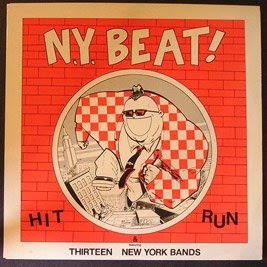 The reunion came about as a result of profiles and interviews I posted over the last year about bands and musicians who were part of the 1980's NYC ska scene. As I met and spoke with more and more musicians who played in the bands featured on the N.Y. Beat! compilation, they were excited about the idea of coming together to celebrate the social and musical movement they collectively created.
The Beat Brigade reunion at the Knitting Factory this past fall was the catalyst that really set the reunion wheels in motion. I got to know the members of the band and I also met Sid Reitzfeld (A-Kings) at that show and after speaking with him about the idea, he graciously offered his bar as the location for the reunion. The final piece of the the puzzle has been meeting Steve Shafer who writes the great blog, The Duff Guide To Ska (which is also based in New York City). Shafer worked at Moon Records for nearly 10 years during the late 80's and 90's and has a unique insider perspective on the growth of the NYC ska scene and the resulting 3rd wave ska explosion in the 1990's. He also shares my passionate devotion to ska music and the NYC ska scene. We are working together to get the word out through our blogs and hope to work together on more ska-based events.
As background, 'NY Beat: Hit and Run' was the very first compilation of U.S. ska ever. Released by Moon Records in 1985-86, it captures a snapshot in time of a vibrant New York ska scene that was notable for its musicianship but also its cultural diversity and its relative youth (average age 17-20 years old). While the music on the record is more influenced by the British 2-Tone movement than the later bands that would drive the third-wave revival, its a diverse mix of ska, reggae, pop, punk, funk, rock and soul. Artists include A-Kings, Beat Brigade, The Boilers, City Beat, Cryin' Out Loud, The Daybreakers, Floorkiss, The Press, The Scene, Second Step, The Toasters and Urban Blight. Amazingly, many of the musicians who started and played in these bands are still actively playing and performing.

The original issue of the comp was celebrated with a big show at Danceteria in 1986 featuring all the major bands who were part of the NYC ska scene at the time. In many ways it was the high point for the NYC ska scene which really exploded both in the New York City area and outside the northeast, particularly in California. I was at the launch party show, and it inspired me to pick up the bass guitar and start my own ska band Bigger Thomas.
There is a NY Beat! Facebook page dedicated to the reunion and it has quickly gained fans and become a way for band members and fans to reconnect. There are also tons of amazing pictures, interviews, articles, video and live shows posted on the page which speak to the power of the NYC ska scene to connect and bring together a diverse scene of musicians and fans who helped make ska the sound of New York in the 80's and early 90's. Feel free to visit the page and add your own two cents, upload a picture or share a memory.
If you happen to be in New York City on April 10th, please come by Dusk Lounge.  In the meantime, please feel free to contact me with any questions.
Posted by Marco On The Bass at 2:18 PM

Sounds great. I remember hearing tracks from that album on a pirate radio station here in Dublin in 1988 and was amazed to hear that there were actually bands playing ska in the States. And some great bands too. And then it seemed to spread to other parts of Europe outside the UK and beyond...exciting times from 1988-90 especially. As the 90s progressed, perhaps quantity took over from quality