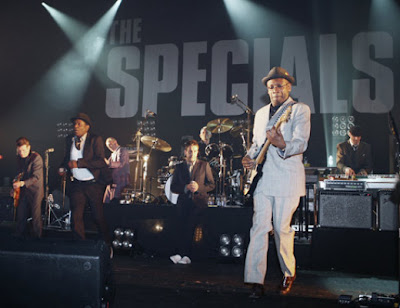 I'm sorry to be the bearer of bad news for fans of The Specials hoping to see the band perform at the Sound Academy in Toronto tonight (Monday April 19th). According to news distributed by Against The Grain, a concert promotion company in Toronto, The SPECIALS first concert in Toronto in over 29 years originally scheduled for tomorrow (monday) has been POSTPONED until August 2010 due to an emergency medical ailment. There was no further elaboration on the medical ailment. During the first UK tour last spring, the band was forced to postpone a show when lead singer Terry Hall lost his voice. Singer Neville Staple missed the band's performance on Late Night With Jimmy Fallon last week and bassist Horace Panter has been recovering from a knee operation that has left him hobbling.

According to the communique, the shows at Terminal 5 in New York tomorrow and Wednesday are still on (though this still needs to be officially confirmed), and the Toronto show is already re-scheduled for the 4th week of August (when the band is also planning to perform a free show in New York's Central Park), suggesting a larger tour of North America is in the works for later this Summer. The date for the new Toronto show should be announced later this week and all original tickets will be honored for the August 2010 date.
By the way, the This Art 2-Tone after party events here in New York at Dusk Lounge are still a go for tomorrow and Wednesday night, though the art itself is stuck at Heathrow Airport in London because of the Icelandic volcano ash. Hopefully, like The Specials it will make it to New York safe and sound in time for the show tomorrow.
Posted by Marco On The Bass at 7:41 AM

thanks for sharing this, perhaps maybe it's karmic as the last time the specials w. the original lineup feat. founder jerry dammers, hall, staples, golding et al was outside of toronto in oakville at the police picnic in 1981. although i am disappointed i can take heart in the fact that they will be back in aug and add on more dates for a full-on tour of north america and here's hoping they'll be all healthy.

Happy to share the information. I knew a lot of people who were heading up to Toronto from NY for the show tonight. The silver lining is that a North American tour is in the works for August.