Who's Opening for The Specials in New York?: Felix Hall & Trevor Evans 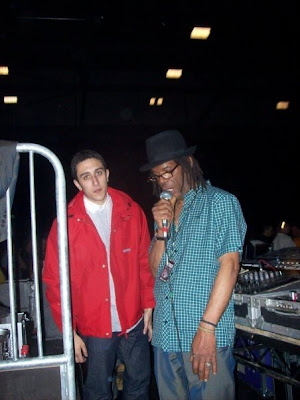 One of the most common questions of late is 'Who is opening for The Specials?'. The answer is that if you’ve been lucky enough to secure tickets to see them live you’ll be treated to a killer opening DJ set courtesy of Felix Hall and Trevor Evans (see his star turn earlier this week subbing for Neville Staple on the Late Night With Jimmy Fallon Show below). Evans DJ'd for The Specials on their original tours in 1979 and 1980.

Felix is the son of Terry Hall, and along with Evans has been winding up fans of the band in the UK, New Zealand, Australia and Japan with their pre-gig mix of Dub, Punk and Ska sets. Now they are here to do the same in the U.S. Felix lives in London and he's been DJing strictly reggae for about 5 years with a concentration on roots music from the late 70s and early 80s.

Felix did a guest spot on East Village Radio on April 12th, and you can listen to and download his set. Click on the April 12th link to see the set the set list and give it a listen.
Posted by Marco On The Bass at 12:12 PM

There is no doubt that Felix is Terry's son, is there?

I think it's great that they are deejaying, but it would have been nice to feature a local opening act or two, wouldn't it? Not like there is any shortage of quality ska bands in the NYC area...

I agree that it would have been great if The Specials had spotlighted local bands in LA, Toronto and New York like they did with Pama International in the UK. But as a wise promoter once told me. 'If its a sell out you don't need an opener to bring in more people.'

Marco, do you have any info on what time the Specials hit the stage in NYC?

Hi Andrew. I think the DJ set lasts about 30-45 minutes after the doors open at 8 pm and then the band hits the stage.

Hi,
I am the Wife of DJ Cardboard, who was THE ORIGINAL DJ FOR THE SPECIALS IN 1979 & 1980 (and the icon on the sleeve of the The Selecter Album too much Pressure).....Trevor is a dear friend of ours, and am sure he would like this fact made known.
Cardboard is recovering from Cancer, so is unable to take part in the Two Tone revival in a big way unfortunatly.
Thanks for your time..
Lindsey

Came across your blog while looking for pics of The Specials show in Toronto. Good stuff.