The Specials In L.A.! - Sell out crowd greets the band with 30 years of pent up excitement (and aggression!) 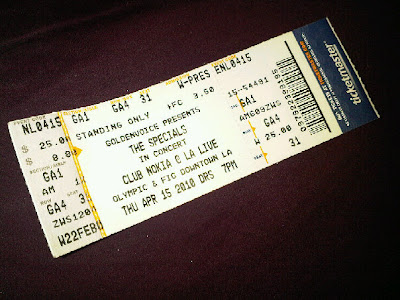 Reports of the The Specials first live show in the U.S. featuring most of the original line-up are slowly filtering in. Rolling Stone Magazine had a thorough review of the show last night at Club Nokia. The other good news is that Neville Staple was back on stage after missing the band's performance on Late Night With Jimmy Fallon earlier in the week.
Based on the RS review, it sounds like the pent up wait and excitement at the band's return may have gotten the better of the crowd who true to their L.A. punk roots began pushing and shoving one another and stage diving to the annoyance of Terry Hall: By the fourth song, “Its Up To You,” the crowd had grown unruly in their excitement — a little too authentic to the spirit of the original punks. “If you spit anymore, I’ll dive down and break your head,” Hall exclaimed with brimming vitriol at the start of the fourth song, “Up To You”; the rough atmosphere continued, however, with fights breaking out sporadically and the stage repeatedly invaded by audience members. Then again, the hectic vibes radiating through the venue proved this was no mere nostalgia trip: it only reflected the continued significance of the music’s relentless riddims and inner-city tension.

Here is video of the band performing 'Monkey Man' from the show:

Here was the set list for the show. Nothing unexpected, but nice to see 'Friday Night, Saturday Morning' which is a favorite of mine.

“Do The Dog”
“(Dawning Of A) New Era”
“Gangsters”
“It’s Up To You”
“Monkey Man”
“Rat Race”
“Hey, Little Rich Girl”
“Blank Expression”
“Doesn’t Make It Alright”
“Stupid Marriage”
“Concrete Jungle”
“Friday Night, Saturday Morning”
“Stereotype/Stereotypes, Pt. 2″
“Man at C & A”
“A Message To You, Rudy”
“Do Nothing”
“Little Bitch”
“Nite Klub”
“Too Much Too Young”
“You’re Wondering Now”

Encore:
“Ghost Town”
“Enjoy Yourself (It’s Later Than You Think)”
More reviews and reports as they trickle in.
Posted by Marco On The Bass at 9:34 AM

Nice, can't wait to see the show Weds night. I think I'm getting a photo pass but not definite yet. Hopefully the crowd isn't as aggressive/annoying in NY as it seemed in LA.

So typical of LA to act like a bunch of Hooligans! Especially the big bugg-eyed skinhead trying too hard to live up to what he thought he was. Leave that attitude for your Oi! or Hardcore shows. No class!
It was just great seeing the Specials Live and direct! Definitely worth it!!! They still skank better than most. It was great seeing Gwen and No Doubt paying their respects and all the true Rudies from yester year (Angelo(Fishbone), Jerry(Untouchables) and Greg (Hepcat)Massive!!!Rudeboys never die!!! See you at Coachella!!

I KNEW I saw Angelo outside! I saw Norwood inside, too.. Kinda hard to miss him with that giant dread of his, yeh know.

Amazing show. I had a change to talk to Lynval before right before security and he is the nicest guy ever. I really do hope they do a full US tour soon because I wanna see em again!

Nokia show was amazing! Terry still sings like he was in his 20's, (perfect pitch & delivery)! It was great to see Neville in top form! The whole band played great! Did Horace hurt his leg? He was sitting down the whole time, and was limping badly off the stage? I hope they come back to LA soon. Also, Gwen & No Doubt, were sitting an an aisle away,rocking to the show! LDR in LA.