Reflections on The Specials in New York 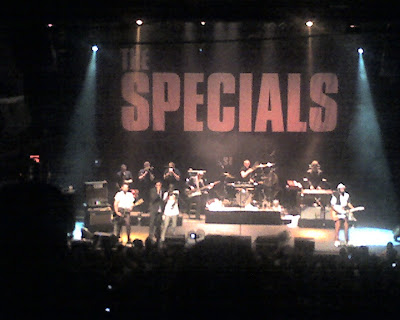 It took nearly 30 years, but it was well worth the wait. That seemed to be the prevailing sentiment of most everyone I spoke with who saw The Specials perform at Terminal 5 in New York City the last 2 days. The show had a magnetic effect on drawing anyone and everyone who has been a part of the New York Ska scene over the last 25 years as well as large contingent of young fans who had not even been born by the time the band had broken up in 1981. There was a real buzz and excitement throughout the crowd and the energy never let up for the nearly 90 minutes the band played. The feeling must have been mutual as the band played a second encore featuring 'Long Shot Kick The Bucket.'
I won't bore you with a show review (you can find good one's here and here) but I was struck by the pure energy of the band which still rotates around the fixed pole of Terry Hall who was in rare form last night. Despite his recent profession of good cheer, Hall seemed to revert to his moody nature shouting down an unruly fan with a tirade of expletives and then hurling a mic stand in anger across the stage. Later, after water spilled in front of his mic stand, he stopped the band in the middle of a wonderful version of 'You're Wondering Now' to take his shoes and socks off. After padding around the stage in his bare feet he watched in dismay as Neville Staple deposited the socks into the audience! Whether is was genuine behavior or theatre, it didn't matter as it added to overall experience of the show. I was also amazed by guitarist Roddy 'Radiation' Byers rock god moves and searing leads and Lynval Golding's energetic runs across the stage. Later, I had the pleasure of meeting keyboardist Nik Torp (who ably fills the big shoes of Jerry Dammers) and saxophonist Drew Stansell who both made appearances at the This Art-2-Tone after parties at Dusk Lounge.
The bands stay in the city created a media buzz and bassist Horace Panter and drummer John Bradbury were interviewed live on WNYC-FM (the public radio station here in New York City). They had an entertaining chat with host John Schaefer about the history of ska and the band's reunion on the music-focused program Soundcheck. You can listen to the interview here.
I can't wait for August 22nd at Central Park Summerstage.
Posted by Marco On The Bass at 12:54 PM

"I can't wait for August 22nd at Central Park Summerstage."

Yes MicroChip its true. The Specials return to NYC for a free outdoor show in Central Park on August 22nd!

I thought the Soundcheck show was garbage. I listened to the tail end of it on the radio, and the host and the "journalist" woman he had on the phone didn't seem to know anything about what they were talking about. Horace and Brad gave interesting answers despite horribly generic and just plan stupid questions though. They saved the program from being abysmal and brought it to just one step above not worth my time.


As far as the Specials show goes, I couldn't agree more with everything you said.