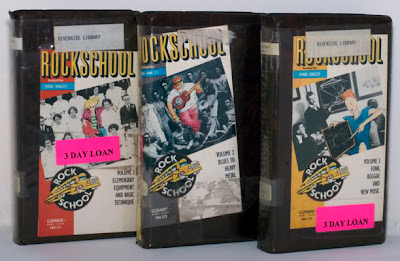 Anyone who came of age in the U.K. or U.S. in the early to mid-80's should remember the show 'Rockschool'. In that long ago time before the Internet and You Tube made everything immediately accessible, it may have been one of the coolest educational television shows about the history of modern music that also happened to demonstrate how the bands and musicians you loved did what they did. It was so cutting edge when it was launched that it was reviewed by the venerable New York Times.

The series was certainly a lifesaver for me as I fumbled and struggled to teach myself how to play ska and reggae on a cheap Sears catalog bass guitar. Indeed, the episodes on reggae (including interviews with Dennis Bovell, Sly Dunbar and Robbie Shakespeare) were my first proper introduction to both the history of ska, rocksteady and reggae as well as the technique of one-drop, stepper riddim and other reggae styles and how to play them. Needless to say, after watching the reggae episode I quickly went out to buy albums by Black Uhuru and LKJ which furthered my musical education.

For the uninitiated, the 1987 show produced by the BBC (which was exported to the U.S. and broadcast on PBS) was hosted by three British musicians (Henry Thomas, Deirdre Cartwright and Geoff Nicholls) who patiently explained how-to-play a variety of music (Rock, Funk, Heavy Metal, Reggae) and also introduced a generation of young minds to a world of syn-drums and MIDI guitars. I owe much of my early understanding of the rudiments and technique of how to play reggae music to Thomas, the show's resident bass player.

Below is the episode on reggae. Its definitely worth a watch for the clips with Bovell and Dunbar alone, though the hosts are dedicated and enthusiastic guides and their patient earnestness remains sweetly engaging throughout. While the series is long out-of-print (and a bit dated in terms of musical technology) its still a fantastic look back at one of the most fertile periods in modern music history. I've seen copies of the entire series (and the corresponding books that were sold as part of the program) floating around on EBay.

Do you read the Pama forum? I only ask because these came up a few days ago and it just seems a funny coincidence that such a thing would pop up two places at the same time.

Hi Jon. Thanks for your comment. I don't read the Pama forum. Just a happy coincidence and another instance of collective consciousness in action!

I totally remember this series from back in the day. PBS actually had some great stuff back in the 80s...this, Dr. Who, DeGrassi...(imported from Canada and the UK).

Thanks for that Marco, I never saw this series (I was going through an anti-TV phase in the 80s and 90s), really interesting. And great to see three of my biggest heroes in one show (Sly, Robbie and Herbie Hancock). Shame they didn't note the connection between Sly Dunbar's brilliant rhythms and funk... Sly (real name Lowell) got his nickname because he was such a big Sly Stone fan.

Hi Nehama, Rockschool was a great series and they covered a wide variety of musical styles including a great section on funk. Check it out on YouTube as there are amazing interviews with Bootsy Collins.

I loved Rockschool, I used to watch it back when I first picked up the guitar as a teenager. Somewhere I still have VHS tapes with the Blues and "New Wave" episodes, I need to find them and digitize them one day...