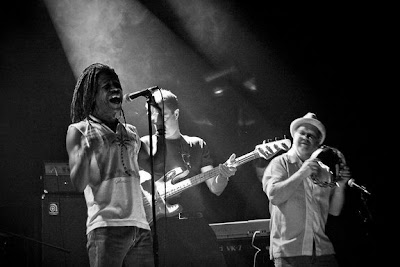 It is with great excitement that I'm able to announce that Blue Riddim Band is readying the release of their first new album in 25 years! For those of you in the know, this is truly an achievement for a band that has persevered and stayed true and devoted to its love of reggae. For the uninitiated, read on and join the celebration!
While reggae has become a global phenomenon, the idea of an American reggae band has often been hard for a lot of music fans to comprehend. However, very few groups have played reggae as convincingly as the Blue Riddim Band who hail from Kansas City. Drawing on influences from Coxson Dodd's Studio One label and Duke Reid's Treasure Isle label, Blue Riddim has flourished for four decades by mastering the rhythms that are the basis for all Jamaican music. While other non-Jamaican reggae bands have fallen into the trap of trying to reproduce the crossover sound of Bob Marley and The Wailers, Blue Riddim became students and later experts who could play a range of ska, rock steady, and rockers reggae like the originals they pay homage to on their new album.
At their height in the early 1980's, Blue Riddim had the distinction of being the very first American reggae band to be invited to play at Reggae Sunsplash. Their blazing set of ska and reggae covers and originals as dawn was rising over Jarrett Park on August 15, 1982 is legendary. They earned two encores from the crowd of 20,000 Jamaicans who were mesmerized by their 'blue eyed reggae.' Their Sunsplash performance was recorded for the LP 'Alive In Jamaica' released in 1984 which was later nominated for a Grammy for best reggae album in 1985 (see video of the band performing 'Nancy Reagan'). Let that sink in for a minute. The band was nominated for a Grammy!

Shortly after achieving the validation that came with a Grammy nomination, the band was hit by a series of trials and tribulations that made it almost impossible for them to build on the momentum that should have made them household names and stars. Indeed, the reggae historian Roger Steffens has said, "All the attention that UB40 ever got, it should have been lavished on Blue Riddim." Sadly is was not to be. First the band fell into a legal dispute with unscrupulous management that left them broke and unable to use their band name. Then the band was hit by the untimely death's of its co-frontmen Bob Zohn and Scotty Korchak. Lesser band's may have given up. However Blue Riddim has persevered and their legacy as the best American reggae band of all time remains intact.
Now 25 years on, the band have finally regained the right to use their name again and they have re-emerged with a brand new album. 'Tribute' is a complete re-birth for the band, who have linked up with producer Kyle Dykes (A.K.A Leonard Dstroy) who urged them to record new material. Dykes father Jimmy had played in a few Blue Riddim Band spin-offs (Nu Riddim Band and Strategic Dance Initiative -- and appears on the new record), so he had an in with a band that was still reeling from the death of its long time front man Scott Korchak who passed away in September 2007.
I recently connected with the band's bassist Todd 'Bebop' Burd who filled me on the new album and the band's plans to celebrate.

Which original members of the band are featured on this new recording? What's the line-up of the band that recorded the new album?
The guys from the original band are Steve “Duck” McLane (drums) and Jack “Blacky” Blackett (sax). I play the bass and joined in 1983. Jimmy Becker (harmonica) makes a cameo appearance on the CD (he played on the 'Alive In Jamaica' album) .

The band also includes:
Keyboards : Dan Burgner, Joe Miqulion
Guitar : Jimmy Dykes
Trumpet : Jack Lightfoot
Trombone : Chris Bartak
Vocals : Edward Turner
What was the inspiration behind the newly recorded 'Tribute' album?
The inspiration behind 'Tribute' is simply that, a tribute. A tribute to our fallen comrades in our own band and to the originators of rocksteady and dub. All of whom got little or no recognition. This is our tip of the hat to our brothers and mentors. Also, we want to make the point that there is at least one band that can re-create music from that era (`65 to `69) without assistance from computer programs.

This whole project was not planned. Nothing about it was planned out. The new CD, its all something that seemed to come about on its own. To keep an air of rawness, the band was not informed what songs were to be recorded prior to the actual recording session. I kept the air conditioning off and we used a minimal amount of mics. My thought was that recording conditions should be a bit physically uncomfortable to re-create some of the conditions that existed at Studio One and try to catch a vibe that way. For the most part, it seems to have worked.
Where did you record the album and who produced it?
The CD was recorded, mixed, and mastered all here in Kansas City. It was produced by me and Leonard Dstroy. Leonard also engineered and mixed it.
What songs did you select to record and why? Who were the original artists that recorded them?
After a thorough scouring of the archives, (i.e. Studio One/Treasure Isle), we arrived at the following selection of songs.

Below is video from earlier this year of the band performing the track 'Ba-Ba-Boom' from 'Tribute'.
The band just recently secured the rights to use its name again. Can you share a little bit about the long legal battle over the band name and how you finally got it back?
As far as the legal battle concerning the use of the band name and how we got it back. One word: Attrition. We won because we are the last men standing.

Are there any plans to re-release your back catalog including 'Restless Spirit'. 'Alive In Jamaica' and 'Nancy Reagan'?
The new CD will be released on “Riddim Records” our own record label, with some celebration in late July or early August. I’ll let you know once we get the exact date. We’re also going to re- release Restless Spirit, Alive Jamaica, and A Major Label-EP on the same label.

Is the band playing any shows to celebrate the release of the album? Are any tour dates planned?
The new release will help to rekindle interest in the band, welcoming a new audience while rallying our established fan base. We have been playing around Kansas City, MO every eight weeks or so, and have recently headlined the Prairie Vibrations reggae festival in Lincoln, NE. Although no major tours are scheduled they are certainly not out of the realm of possibility . We are hopeful that the new project will help create touring opportunities. Roger Steffens is writing the liner notes, and Carter Van Pelt is writing an updated bio. We are going to start with cd`s and the digital download thing. We might go ahead and press a limited amount of vinyl as well. Since we are financing thing thing ourselves, it is a matter of acquiring the capital as we proceed.
You can download two free tracks from 'Tribute' -- 'Mr Dub' and 'Only A Dub' from the band's Web site.
Posted by Marco On The Bass at 8:23 PM