The English Beat to Release A New Album in 2010? 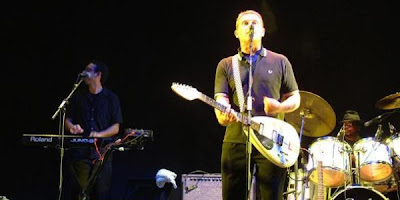 Are The English Beat about to join The Specials in releasing an album's worth of new songs in 2010? According to an interview in Billboard Magazine, Dave Wakeling says the band has demos of 17 songs ready to go, including 'How Can You Stand There', 'Said We Would Never Die' and 'The Love You Give Last Forever' which have become staples of the band's current live set.
I heard many of the new songs listed above at the show my band played with The English Beat last Thursday at the Sellersville Theatre in Sellersville, PA. The new ones are a melodic mix of Wakeling's best pop ballads which would sound at home on a follow-up to the band's last album, 1982's 'Special Beat Service' (e.g. no hint of ska) as well as a top-notch selection of upbeat and catchy 2-Tone ska tracks that highlight and feature the band's energetic MC, Antonee First Class. Below is live video of 4 new songs that the band plays as part of their live set, all of which could be likely candidates for inclusion on the new record:

According to Billboard, "Wakeling says he's also considering putting out EPs rather than albums, mixing new songs with live and acoustic tracks. "I'm tempered by realism," he explains. "A lot of my friends, the '80s peer group, have brought out albums 'cause they think that's what you're meant to do, but they forgot to check if there's an audience there ready to buy it. I never fancied making a vanity record. I don't want boxes of CDs in my garage or people embarrassed to talk to me about my new record. I think it's presumptuous to just put out a CD and wonder where the limo is at the airport."
Given the amount of time Wakeling and his band are spending on the road touring (the band's bassist Wayne Lothian told me they would be on the road 10 out of 12 months in 2010), they are cultivating a built in audience that is very likely to form the core market for a new release. With the right promotion and tours (including one planned with a re-formed Squeeze later this summer in large outdoor arenas) the band can also count on more casual fans who come out to hear all their old favorites but may end up enjoying many of the new one's that are being road tested now.
Posted by Marco On The Bass at 2:16 PM

DW has been talking about releasing a series of EPs for some time now--I remember reading interviews with him from last year mentioning all this. I do hope it comes to pass, though.