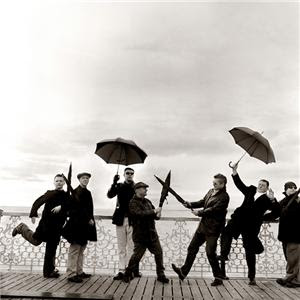 Is it 1980 or 2010? For those of you living in the UK, it might seem like musical deja vu with The Specials, UB40 and both versions of The Selecter all playing shows this year. Now add Madness to the mix. Following quickly on the success of their 2009 album, ‘The Liberty Of Norton Folgate’, Madness have reportedly returned to the studio to record songs for an album that will be released some time in 2011. The band have also just announced the kick-off of a fall UK tour they have dubbed 'Do Not Adjust Your Nut' and its being rumored that some of these new tracks may get their first public airings during these shows. Special guest on all of the dates will be ex-Beautiful South front man Paul Heaton. It also been reported that the band have been reviewing a trove of unreleased tracks from recent times and beyond, which suggests a number of previously recorded, but never released songs may also finally see the light of day.
The news about the tour and new songs has generated significant discussion over at the Madness Central forum. I tend to trust what I read there and the admins tend to be on top of their game. One regular poster named Graham, who seems to be privy to inside information on the band posted this last week."......as for the possibilities of new material.....various members of the band have said over the last 18 months or so that they'd like to do something new....or have been working on new material....Suggs even went so far as to say they wanted to do it quickly....add to that the fact they had a number of songs left over from Folgate that weren't used (and could have been honed a little in the meantime)....and I guess it's possible they could have got something together....' Adding further fuel to all the fire of discussion about new songs came in a recent interview the band's drummer Daniel 'Woody' Woodgate did with Irish radio channel RTE. Have a listen to the interview here.
Posted by Marco On The Bass at 8:13 AM