Bim Skala Bim Reunite For A Series Of Summer Shows 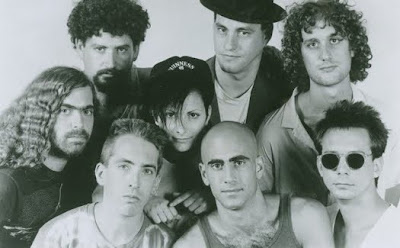 Boston's Bim Skala Bim have quietly announced a series of four shows around New England in early August. These shows will be their first since they opened one of the Mighty Mighty Bosstones' Hometown Throwdown shows last December and a few nights later played a New Year's Eve bash at the Middle East in Boston. Before these two shows, they had not played together in eight years.

Bim Skala Bim and The Toasters (from New York) both formed in the summer of 1983, apparently within about a month of each other and have the distinction (along with The Untouchables from Los Angeles and Heavy Manners from Chicago) of helping to create and build a thriving American ska scene in the 1980's. The band were influenced by the 2-Tone, as well as bands such as The Clash, UB40 and Bob Marley. They released several albums over the course of their career and they started their own record label to release music by other ska bands.

Here are a few videos of the band performing a few of my favorite songs from a show in Boston in 1992 including 'In The Mail', 'Jah Laundromat' and 'Diggin' A Hole':

The August show dates include:

August 5: Jerky's Bar & Grill (Providence, Rhode Island)
August 6: The Middle East Downstairs (Cambridge, Massachusetts)
August 7: The Beachcomber (Wellfleet, Massachusetts)
August 8: The Webster Underground (Hartford, Connecticut)
But don't call this long weekend of a shows a full-fledged reunion just yet, though. A note on the band's website doesn't sound terribly official: 'Some of you may have noticed that shows and dates seem to change unexpectedly at the last minute after you've already made plans. Well ... sometimes things come up (or fall through) for reasons you don't even want to know about. We hope we haven't caused anyone too much inconvenience, and we'll do our best to keep this list as accurate as possible, but you may want to check with the club/school/theater before rushing off to a show just to make sure the show's still on.' Here's to hoping the band decides to play more shows like this in the coming months.
Posted by Marco On The Bass at 6:31 PM

One of my favorite ska bands ever. I have to try to get to one of these shows.

Any word on whether Jackie Star will be with them like at Throwdown?

Let me know which one you decide to go to.