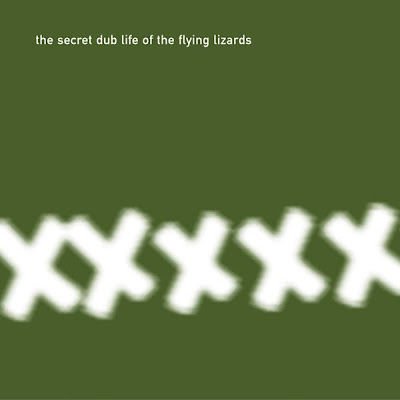 While the convergence of punk and reggae might have all started when Rastafarian DJ Don Letts played reggae records between punk bands at the Roxy, there were ongoing and significant collaborations between members of each musical tribe which lead to some of the best music of the entire era: The Clash (who played reggae covers) and Mikey Dread, The Slits and reggae producer Dennis Bovell (who invented Lovers Rock) and The Ruts who recorded the reggae song 'Jah War' and released it on Misty In Roots label.
Perhaps the most unlikely collaboration (or should I say collision!) of reggae and avant garde punk occurred in 1978 when David Cunningham (who was beginning to have success with the U.K. punk-pop absurdist band The Flying Lizards ) remixed a series of songs recorded by Jah Lloyd (Patrick Francis) , a well-known Jamaican-based reggae singer, deejay and producer. Though they never met face-to-face, Cunningham's mix of Jah Lloyd's songs remain a great example of the reggae/punk ethos. Though the songs remained unreleased until the mid-90's, 3o years on, this collection may be one of the most interesting and unusual dub reggae albums of all time. 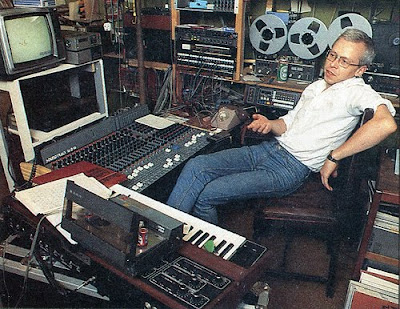 For those unfamiliar with Cunningham (above in the studio in the early 80's) or The Flying Lizards, they scored a still icon-status hit with a hysterically manic cover version of Berry Gordy's "Money (That's What I Want)". The song still retains a unique sound and once you have heard it you will never forget the buzzing, clicks and odd sounds that pervade it. It's anti-pop music of the highest degree and it scored a totally unexpected hit for Cunningham and company (a shifting group of musicians and singers). According to an article in the Sound Collector from 2001, "The Flying Lizards wasn't actually a band at all. It's not practical to judge The Flying Lizards solely in terms of their status as a rock band, or one of their albums as a finished or commercial product marketed by a record company. The Flying Lizards were above all a way of doing things, in the studio and in the mass consumer market."

Cunningham owed much of his sound experiments with The Flying Lizards to the sound of dub reggae. Julian Marshall, the piano player on "Money" told Melody Maker in 1979; "David played me the original version to refresh my memory, put one mike in the piano and another one by the metronome on the floor. We did it twice, the second time with various things - Chopin sheet music, a glass ashtray, rubber toys, a cassette recorder, a telephone directory - thrown into the piano to get a kind of banjo effect. David said 'That's fine,' and I was slightly amazed: it sounded fairly wrong. But the next time I heard it, at Utopia, where he was cutting it, it sounded fantastic." In many ways Cunningham was one of the first UK producers as artist, and his path followed another musician turned producer who sought to provoke and irritate through his explorations and experiments with sounds -- Lee 'Scratch' Perry.
Cunningham further explained his Perry-like production style on 'Money' to the Record Mirror in 1978; "Then I took the tape to Brixton and put the other bits on there, using a borrowed drum kit. The knock on the record is a snare drum and tambourine being played together, I was hitting the snare drum with a stick. I was in a different room to the tape recorder so I just got a very long mike cable and took the mike out to a very echoey room right next to the toilets and overdubbed it. There isn't any bass drum on the record, it's just bass guitar being hit with a stick. Then we put the guitar solo and backing vocal on and put it back onto the Vox, and that was the master tape really."

The unlikely story of how Cunningham and Jah Lloyd came to work together begins when Cunningham received a mono tape in 1978 from Jah Lloyd and was told to do whatever he wanted with it. Cunningham knew he wanted to create a dub record out of it, but since it was a mono master tape, the only thing he could do really was magnetic tape splicing (this was long before samplers). Without the ability to use standard studio techniques to create dub sounds, Cunningham employed endless, overlaying loops to make the dub effects. The fact that this was all done manually on the magnetic tape is impressive to say the least, and its very possible that there is not another dub album that relies so heavily on tape loops, or even uses them at all. 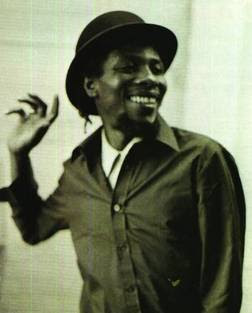 Patrick Francis began his career in the mid 1960s as a singer in The Mediators and worked as a solo singer with tracks such as 'Soldier Round the Corner' and 'Know Yourself Blackman' recorded for producer Rupie Edwards. In the early 1970s, he turned to production, recording The Mighty Diamonds. Recording as Jah Lloyd, he turned his hand to deejaying, enjoying hits in Jamaica with 'Black Snowfall', 'World Class', and 'Beware of the Flour'. He then recorded with Lee "Scratch" Perry, who decided to rename the deejay Jah Lion. One of their songs "Soldier and Police War" (a deejay version of Junior Murvin's 'Police & Thieves') topped the reggae chart. This success lead to a two-album deal with Virgin Records' Frontline label. This is where Jah Lloyd and Cunningham's musical fates intertwined.


The songs on 'The Secret Dub Life of The Flying Lizards' have a haunted 'Ghost In The Machine' quality with creaking hinges, bouncing ping pong balls, popping champagnge corks, wounded trombones, shuffling papers and other odd sounds that float in out of Jah Lloyd's hypnotic reggae tracks. According to liner notes for 'The Secret Dub Life Of The Flying LIzards' that Cunningham wrote in 1995 when the record was finally released, 'The source tapes for this CD were recorded in Jamaica by Jah Lloyd (Patrick Francis) as part of a series he made for Virgin Records' Front Line label. The original tapes were not released and were offered to me by Front Line' with the suggestion that I should 'remix' the music. I accepted the project, expecting lots of time in one of Virgin's studios to play with the music and the equipment, only to be presented with a mono master tape of the music. So I began to invent (or perhaps re-invent) techniques of editing, looping, filtering and subtraction to deal with unremixable mono material (these were the days before samplers). the subsequent work took a long time; as I thought it might be something of an indulgence I only worked on it at weekends and evenings rather than let it interfere with other projects.
Below is video for the track 'Flicker':

Sadly James Kelly HAS forgotten that the RUTS l.p. had nothing to do with Scientist but maybe quite a bit to do with Mad Professor ?

Much Better than the Lizards cd is Jah Lloyds Dread Lion dub!