'This Is England 86' to be a 4 part TV Series on Channel 4 in the UK: Show Follows Up Where Movie Left Off 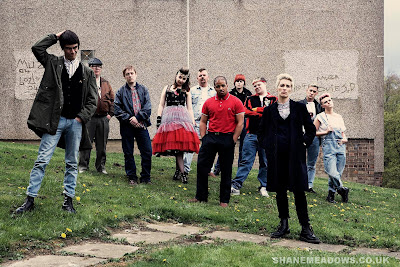 Fantastic news for fans of Shane Meadows 2006 gem of a film 'This Is England'. The award winning director has wrapped filming of a four-part television sequel to the film that will air on Channel 4 in the U.K. this fall. 'This Is England', which picked up several awards including the 2008 Bafta for Best British Film, centred on young skinheads in the summer of 1983. It followed 12-year-old Shaun, played by Thomas Turgoose, and his acceptance into a group of skinheads, which is eventually split by a growing racist influence. 'This Is England '86' revisits the main characters – Shaun, Woody and Lol – in 1986, when the World Cup was taking place in Mexico and 3.4 million were unemployed in Britain.

Shaun is an angry and lonely 12-year-old who has recently lost his father in the Falklands War. Surrounded by unemployment, malaise, and picked on at school, he finds companionship and an outlet for his frustrations among a group of skinheads whose leader, Woody (Joe Gilgun), takes the boy under his wing. This seems harmless until Combo (Stephen Graham), a violent and racist skinhead rejoins the group after a 3-year stint in prison, shattering the group's camaraderie with racism and crime.
Below is one of my favorite scenes from the film when the main character Shaun chances upon a non-racist skinhead gang (which includes two Jamaican members), led by the charming and laconic Woody. Shaun immediately takes to Woody as a surrogate father figure and is soon admitted in to the gang. Admission means parties, a new girlfriend, a new haircut, a new Ben Sherman shirt, and a new pair of DM boots (purchased by his mother in an extremely funny scene) as well as a whole new group of friends who treat him as an equal.

Meadows has confirmed some information about the television series, including that Combo (again played by Stephen Graham) returns, that the fate of Milky will be revealed, and that part of the story will be based on a wedding between Woody and Lol that is called off. He said if the series succeeded, he would follow it with another series.
Posted by Marco On The Bass at 8:59 PM

Fantastic, looking forward to see-ing this.
Reminds me so much of my own youth, as it does for a lot of people i m sure, especially the shaving heads scene by Lol, i think my first haircut was not so far from this exact scene by a skinhead girl sporting a Fred Perry!
GOOD NEWS..........

Hi Grum! Pleased to meet you and thanks for the comment! Can you share any more information about the shoot you were on?

Any of way of seeing this in America WITHOUT resorting to illegal downloads?

At the present time there are no plans to distribute the TV series in the US. However, I did hear that Shane Meadows plans to turn the 4 episodes into one or 2 feature length films for international distribution, so chances are it will be available here at some point.

Loved "This is England" (and always thought that Milky died after the beating...), so I'm psyched to know that a sequel has been shot!

In the UK thw film is even being given away with the Music Press... think is was NME !!

Always wanted to see a Meadows film and just saw ...England 2 weeks ago and loved it. Looking forward to the series.