UB40 Film Retrospective: 'Labour Of Love' & 'Dance With The Devil' 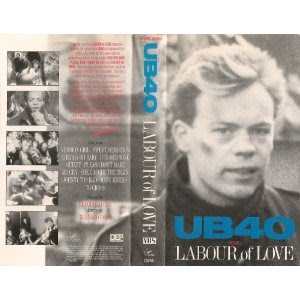 Ever since I found out about the upcoming 'Singing Off' 30th Anniversary tour, I've been in quite a UB40 state of mind. To that end, I was reminded about some of the more interesting projects that the band embarked on during the height of their popularity in the 1980's including producing two films -- the widely seen and very popular 'Labour Of Love' and the never seen and never to be released 'Dance With The Devil'.
In the 1980’s film and video was such a big part of the marketing of music, that bands had to have a video in order to promote a record. With that in mind and with a goal of breaking the 'Labour Of Love' album on MTV in the U.S., UB40 decided to make a long form film to promote the 'Labour Of Love' album. Filmed in 1983 and released in 1984, it's a 30 minute film starring Ali Campbell in the lead and featuring all the members of the band, their friends and locals in various roles. Shot in black and white in and around Birmingham, it was directed by Bernard Rose (a well known 80's music video director who would later go on to direct major motion pictures). Ostensibly it's a love story set in inner city Birmingham. There's no 'message', no blueprint, just a gritty slice of what life was like where UB40 grew up.
While most of us here in the U.S. probably saw the 'Red Red Wine' video, several hundrewd times when it was in regular rotation on MTV, in fact its just a scene from the longer film which was scripted so various scenes could be cut and shown as videos. Once you've seen the whole movie in context, you do get a greater appreciation for the creativity involved in the overall concept. That said, the film does not feature Oscar-worthy acting (though the fights are quite realistic), and unless you have lived in the UK or have friends with Brummie accents, some dialogue is definitely lost in translation. Regardless, I was obsessed with it and somehow came across a VHS copy which I watched regularly in the mid-80's. In case you've never seen it, or haven't seen it in years, its worth another viewing below. By the way, that's saxophonist Brian Travers and trombonist/percussionist Norman Hassan stealing a car in the opening scene.

Having enjoyed critical success with the 'Labour Of Love' flick, the band decided to try their luck a second time to help promote their 1988 self-titled album 'UB40'. The film 'Dance With The Devil' (named for one of the album's songs) was overly ambitious and much darker than 'Labour Of Love' with Ali Campbell playing a con man who dresses as a Priest to steal from unsuspecting marks but soon grows devil horns and a tail. You get the picture. The album featuring the song 'Where Did I Go Wrong' was a huge success in the UK and rest of the world, but was overlooked here in the U.S. because it was released just as 'Red Red Wine' was enjoying a second wind on the U.S. charts eventually hitting #1 on the Billboard singles chart in October, 1988.
Brian Travers took the helm on directing the film which came as the band were navigating some difficult times following the drunk driving conviction of bassist Earl Falconer which resulted in the death of his brother Ray who was the band's sound engineer. Travers has provided an overview of the long lost film on a post on the UB40 fan forum: 'We called it ‘Dance with the Devil ‘ after an instrumental track on the album, the premise being Ali was a con man and after stealing a priests costume from a church went begging at people house for contributions to his orphans fund. Of course he was a drinking, swearing untrustworthy reprobate who spent all contributions on himself and as a penance for his sins starts growing devils horns, they start as nasty spots turning into little horns sprouting from his forehead as well as a tail. Of course this was liberally sprinkled with our songs from the album, it was a contemporary musical. There was a moral sting in the films tail but it wasn’t really a great piece of art , we rushed to make it in ten days , while at the same time Earl's court case was going on , we were desperate to keep him busy and not thinking about what had happened . We decided in the end not to release the full length film, which I was pleased about, it simply didn’t gel, didn’t do what we wanted it to do but we did use the musical performances as our videos to promote the records so it wasn’t a complete waste of time and pretty much made back its budget. The thing is its just not easy to make films, everyone thinks they have a idea for a film but between the idea and the reality of the finished piece lies a million miles of unknown possibilities. That's why the guy’s that do this make so much money, they are like rare diamonds and even then, they can still get it wrong.

Though it was shelved, members of the band have distributed copies which have found their way into the hands of rabid fans who have posted it on YouTube. Though it may not come close to matching 'Labour Of Love' artistically, the film remains a curiosity because it was never released and is worth a viewing, particularly for fans of the band and the album.