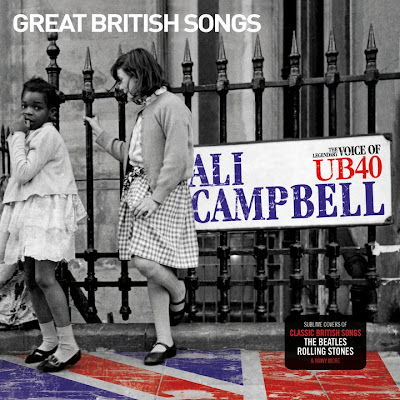 Taking a page from his previous band's long running 'Labour Of Love' album series, former UB40 front man Ali Campbell is poised to release a collection of iconic British pop hits reinterpreted in a reggae style to be titled 'Great British Songs'.
Campbell readily admits that his new album is a lot like the Labour Of Love collection which is now on its fourth edition, but with a twist “This album feels a lot like the ‘Labour of Love’ series that I did with UB40 – except instead of covering old reggae songs, these are hits from British popular music culture. I really enjoyed making it and loved the challenge of taking iconic songs by artists like the Beatles, Rolling Stones and the Kinks and putting reggae and dancehall beats to them.” The album was recorded in London and Jamaica and features Sly Dunbar and Robbie Shakespeare.

Below is a short video trailer about the making of the album:

Campbell was just recently diagnosed with a severe case of Epstein Barr virus that will keep him off the road for the next 2 months. His October tour to support the release of the album on October 18th has been pushed back to December and the early part of 2011. Interestingly, his former bandmates in UB40 will be on the road in the U.K. during October and November to celebrate the 30th anniversary of their iconic 1980 album 'Signing Off'. Campbell's brother Duncan has replaced his as the lead singer in the band.

The track listing for the album is below:

For more information or to pre-order the album visit Campbell's Web site.
Posted by Marco On The Bass at 8:05 PM