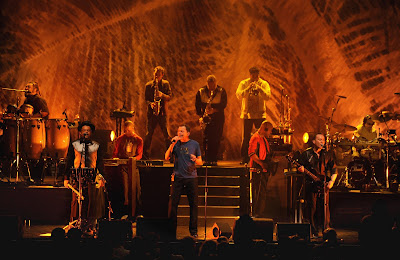 Sadly another iconic British band has had a key member denied a U.S. visa. This time its UB40 toaster Astro (AKA: Terence Wilson) who has been barred entry into the U.S. Astro was previously denied a touring visa during the band's 2006 U.S. tour but made it in to the country for a tour in 2008. He is one of the band's original eight members and one of its most visible on stage serving as an MC and toaster.

Just last month, Neville Staple endured similar treatment from the U.S. Government when The Specials returned for what would have been a short American tour around a TV date booked on 'Late Show With David Letterman' and a free outdoor show in Central Park in New York City. Without the visa for Staple The Specials were forced to scrap all U.S. dates until at least 2011 when they hope to finally sort the visa issue out.

Luckily UB40 has forged ahead on their U.S. tour which kicked off in San Francisco late last week. News of Astro's no-show was first reported on the UB40 Web site by fans who attended West Coast shows and then band saxophonist Brian Travers confirmed it in a post on the band's community page: We got the bad news yesterday that Astro won't be allowed into the US after all..apart from the fact that our mate is stuck at home not able to do the job he loves we all miss him just being around..doesn't feel quite right lining up to go on stage without him.and each time he gets locked out of the US it feels worse. it's a real drag after all the work he put in at rehearsals and now half of what we planned we can't do BUT the American audience has been very kind not letting it get in the way of having a good time and in turn the shows have been a real pleasure to play...

Though hard core fans of the band will definitely miss Astro on stage, according to Travers, the band has compensated for his absence by road testing a number of older songs -- most likely tracks from the 'Signing Off' album -- that they will be playing in its entirety during a 30th anniversary U.K, tour that quickly follows on the heels of the U.S. tour. : We slipped in half a dozen signing off tracks to fill the gap of Astro's numbers , not sure everyone even knows those old songs but it's been great to simply try them out.sometimes you have to be bit brave and step out of the hit set list or it all becomes a little too much bubble gum..not sure they will all stay in this US set though.

I plan to attend the band's show at BB King's on Monday October 11th in New York City. If you are planning to go to the show, drop me a line.
Posted by Marco On The Bass at 2:08 PM

I'll miss Astro, but will be psyched to hear the tunes from the Signing Off era!

See you there, Marc!

I needed me some Astro at the show I just saw them in Riverside California this past Friday. But UB40 sounded great. Love those old tunes from the Signing Off album. Enjoy the show, UB40 has to many songs to choice from and they played tunes from way back to their last cd. Have fun. Wish I was there to see them in New York.