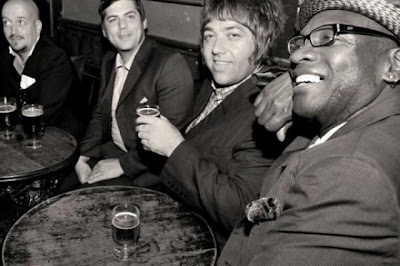 After 10 years of steady touring, recording and working to establish ska and reggae in the UK and Europe, Pama International have announced they will be taking an extended break for the foreseeable future. But don't shed a tear just yet. Fans of the band living in the UK will have one more chance to see the band live when the kick off their 'Pama International Meet Mad Professor Rewired In Dub' tour during October and some final dates in November and December . The show will feature Mad Professor mixing the band at each show to create a live dub experience. The tour will be in support of a new limited edition dub version of the 'Outernational' album the band will release on November 4th.

Here is an excerpt from the a statement the band released earlier this week announcing the break:
After 10 years of working solidly on Pama Intl, time has come for an extended break. It certainly won't be the last you hear of Pama Intl. For the immediate future we're out promoting the Pama Intl meet Mad Professor-Rewired! In Dub album and tour In Oct'10, plus we've almost got the Pama Intl meet Wrongtom album finished (which will come out in the new year). As a proper chance to say thank you for all your support, we'll be doing a number of shows in Nov and Dec'10, which will see some very special guests appearing in the Pama Intl line up. Dates to be announced very soon, but these and the dates with Mad Professor will be the last Pama Intl perform live, so if you'd like to see the band anytime soon please come along in Oct/Nov/Dec'10. It'd be wonderful to see you!
While I'm sad the band will be on break, I'm very excited about the new projects that band leader Sean Flowerdew is undertaking including pulling together the 2011 London International Ska Festival which will take over the Clapham Grand Theatre in London from April 21st to April 24th and will feature a reunited version of his late 80's ska band The Loafers who will be one of the headlining acts. More information is available on the Facebook page created for the Festival.
Posted by Marco On The Bass at 9:34 AM