What's It Like To Be A Member of UB40? - Trumpeter Laurence Parry Provides An Insiders View 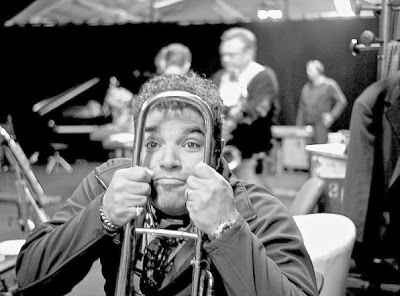 The phenomena that is UB40 shows no signs of slowing down. Indeed, the band has just released 'Labour Of Love IV' here in the U.S. and are now busy rehearsing for a 30th anniversary tour of the U.S. and U.K. this fall to celebrate the release of their classic 'Signing Off' album in 1980. It was that album that set the band on the path they continue to follow. Though they may no longer be blazing trails musically, I have tremendous respect for the consistency with which they have sought to promote reggae music and the original artists that inspired them. Say what you will about the 'Labour of Love' series of records, but each one pays respects (and royalties) to the Jamaican artists who wrote and performed the originals.
UB40 remains a personal inspiration to me as a musician primarily because most of them didn't know how to play their instruments when they started. I've always been particularly impressed by the brass section. Initially it included Brian Travers on saxophone, Norman Hassan on trombone and Astro on trumpet. As time went on, Hassan and Astro went back to percussion and toasting respectively. During most of the mid-80's and early 90's the Tenyue brothers joined Travers in the brass section. Since the mid-90's the section has been anchored by Travers along with saxophonist Martin Meredith (who received his first saxophone from Travers when he was a teen living in Birmingham) and multi-instrumentalist Laurence Parry who plays trumpet and trombone. The section remains one of the best in the business and many UB40 songs are memorable for the brass melodies that carry the songs. 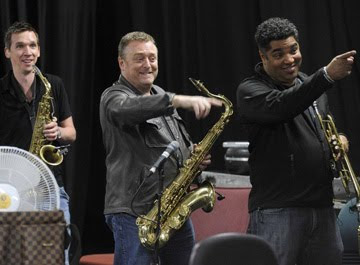 Parry's musical pedigree is striking and he is a renowned musician in the U.K. jazz and blues music scene. Joining the R&B group Rent Party straight out of school at 17 in the early 80's, he immediately found himself touring the world, playing international jazz festivals and sharing the stage with the likes of Miles Davis and Chic Corea. Rent Party built a solid reputation in the UK as well as in Europe, topping the bill on countless festivals and in many clubs, and they appeared on many TV shows releasing four singles and two albums.

Before landing with UB40 full-time in 1994 when they recorded and released the 'Promises & Lies' album, Parry was an in demand session musician performing and recording with a who's who of musicians including: Robert Plant, The Cure, Midnight Oil, Go West, The Eurythmics, Boy George, Joe Cocker, Matt Bianco, Boyzone, The Brand New Heavies, Prefab Sprout, Phil Collins, Tina Turner, Robert Palmer, Billy Ocean and Beyonce and he also played alongside the JB's, backing various artists (including James Brown) all over the world.

Below is footage of Parry in action with UB40 performing on 'Tyler' and 'King' from a show in Ireland in 2009.


With interest in UB40's US tour starting to peak as the band kick off a 2 week tour starting in San Francisco on September 23rd at The Filmore Theatre, I wanted to provide readers a chance to learn more about Parry, who is one of the very talented musicians who are an integral part of UB40. Read on!

Where did you grow up in the UK?
Leigh On Sea which is about 40 miles east of London lots of music and some great bands come from the area. Dr Feelgood, Depeche Mode etc

What inspired you to first pick up the trumpet and trombone? Who were your musical influences?
A friend of my parents had a trombone in his front room. I tried it one day and managed to get a note out of it to everyone's surprise as i was only about 7. So I kind of owe my career to that first encounter. Fats Navarro and Clifford Brown were my main influences as a trumpet player very cool players then as I got older I was in to Dizzy and Clark Terry as well as many other great Jazz and blues players.

Do you remember the first record you ever bought?
I think it was a Kool and the Gang or Stevie Wonder. I cant remember which one. It was a long time ago!

Tell me a bit about your jazz background. You joined the R&B group Rent Party right out of school right? What was it like to tour play international jazz festivals with the likes of Miles Davis and Chic Corea?
Totally amazing! I was 17 years old on the same stage as some of the greatest musicians of our time, it was a great start and I learned a lot.

How did you end up performing with a such a diverse who's who of bands and musicians like The Cure, The Eurythmics, Robert Palmer, BB King, Robert Plant, Tina Turner, Beyonce, Joe Cocker, Phil Collins, Vanessa May, Ruby Turner and James Brown’s backing band, The JBs?
I don't really know it just kinda happened that way, one thing leads to another and then another and before you know it, your 10 years down the line and you've played with a lot of different people.

How were you first introduced to reggae? Were you a fan of UB40 growing up?
Well I suppose it was through the band really, although I had listened to reggae before but it wasn't one of my main influences when I was young. I've always liked the sound of the band

How did you end up performing and recording with UB40?
I was coming back from the States, when I got a phone call from my manager at the time, who said that the UBs management needed a trumpet player to help them out. So I went over and saw the band play some stadium in Spain and about a week later I was on stage with them and I haven't escaped since!

You've been featured on every UB40 album since 1994. Tell me a bit about the creative process of writing and recording horn lines for UB40 songs?
Well it usually starts with the rhythm section going in and laying down the basis of the track. Then Brian, Martin and myself go in. Usually Brian has some ideas that we play around with and then we lay the basic parts down and then the fun begins as we harmonize and generally mess around with it until we end up with what you hear.

What is your favorite song to perform live with UB40 and why?
'Bring me your Cup'. Its just a great track to play. Lovely brass parts.

How are rehearsals going for the 'Signing Off' tour? Can we expect to hear any songs from the album during the US tour this fall?
The rehearsals are going really well and we might play a couple when we come over!!

Finally, how do you like touring the USA?
Touring in the States is always a lot of fun. Great audiences and some memorable parties, but that's another story!!!!
UB40 will be performing at BB King's in New York City on Monday October 11th. Tickets are available through the club Web site. Let me know if you plan to attend as I'm trying to plan a get together of fans for a meet up before the show.
Posted by Marco On The Bass at 2:18 PM

Nice piece Marco, we don't usually get much in the way of Loz interviews.