The Specials Next Move - More Touring & An Album Of New Material 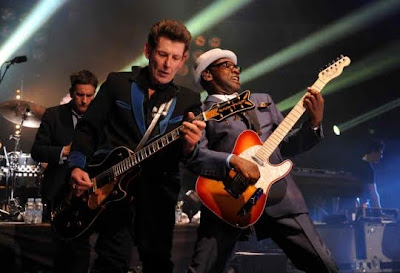 A variety of music news outlets including the BBC and others are reporting what all fans of The Specials have been hoping and praying for -- the band has confirmed that they plan to continue touring and that they will record new material. And if that wasn't enough, they are already in the planning stages of putting on something "fantastic" in the UK next fall. What that is remains to be seen, though 2011 is the 30th anniversary of the release of the Ghost Town single as well as the break-up of the band and the launch of the Fun Boy Three.
Drummer John Bradbury confirmed during an interview with BBC 6 radio that the Specials will record again though warned that fans should expect something different. "Going forward is a healthy thing to do," he said. "We've discussed things that might take a different route. It'll be different to what we've done just because it has to be really. We can't keep doing the same set. We need to combine elements of what we've done before with elements of what we've always wanted to do. The opportunity has presented itself to move on from where we left off." Clearly the band needs to move beyond the Jerry Dammer's penned songs that currently dominate the set list. It will be very interesting to see what direction and sound they pursue.

Below is audio from the BBC 6 interview with Terry Hall and Bradbury discussing the possibility of recording new material, and look back at their very first reunion gig that took place two years ago at Bestival on the Isle of Wight.