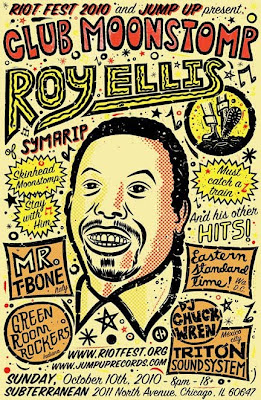 Fans of original skinhead reggae who are near the Windy City are in for a real treat. Riot Fest & Jump Up Records are presenting Roy Ellis -- the legendary soulful voice of skinhead reggae superstars Symarip -- at the Subterranean in Chicago on Sunday October 10th. Ellis will be performing all his hits from the legendary Trojan Records best-seller 'Skinhead Moonstomp' album as well as selections from his Jump Up Records release 'Skinheads Dem A Come' album. Ellis will be backed by Washington D.C-based ska jazz legends Eastern Standard Time, who are also backing Italian-based trombonist and ska singer Mr T-Bone. Indiana-based Green Room Rockers round out the bill.

The Symarip back story is a fascinating one. Originally the band was called The Pyramids and were formed in the mid-sixties by six young British-based musicians of West Indian descent. In the mold of Eddy Grant's band The Equals, they began their career as a straight "pop" group, consisting of founders Frank Pitter, Michael Thomas, Josh Roberts, Ray Knight, Monty Naismith and vocalist Roy Ellis and were signed to President Records.

According to sleeve notes from a best-of collection released by Trojan Records, The band’s relationship with President soured when their record ‘Mexican Moonlight’ was a hit in Germany, but the label neglected to tell them about it. As a result, the band decided to rename themselves so that they could record elsewhere without President Records knowledge. Organist Monty Neysmith came up with a plan: ‘I came up with the idea of turning Pyramids around and you leave out the ‘d’. So originally it was spelt Simaryp. I don’t know how it came to be spelt Symarip!’ So in 1969, safe in the knowledge that Presidnet Records would never unravel the secret of their true identity, Simaryp/Symarip prepared to record for their new labelTreasure Isle.

The band then recorded their first album as Symparip in 1970 and immediately became the face of "Skinhead Reggae" with songs like "Skinhead Girl", "Skinhead Jamboree" and "Skinhead Moonstomp", which is based on the Derrick Morgan song, "Moon Hop". According to Neysmith, the band noticed a new element coming to their live shows: Skinheads. ‘A lot of skinheads started coming to our shows, and Roy and I said, it would be good to write a song for skinheads. We remembered a song [‘I Thank You’ by Sam & Dave] where they said, ‘I want everybody to get on their feet, and this and that, and give me some of that old soul music’. I thought, let’s change the words and put, ‘I want all you skinheads to get on your feet, put your braces together and your boots on your feet, and give me some of that old moonstomping’.
In 1980, the album Skinhead Moonstomp was re-issued in the wake of the 2 Tone craze, hitting the UK pop charts for the first time and a whole new generation of fans were introduced to their sound. The Specials further expanded their name and popularity of Symarip by recording a live cover version of "Skinhead Moonstomp" as part of a medley of 60's reggae songs on the B-side of their "Specials Live EP" which hit number one in the UK charts. 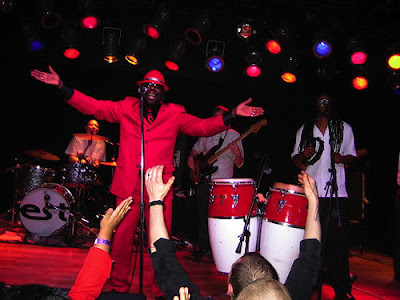 Ellis will be backed by Eastern Standard Time (see the picture above) who seem like the perfect for him as a band. I recently connected with the band's front man I-Peace Unikue who told me the story of how they came to meet Ellis and back him up.
How did you first meet Roy Ellis?
Well, the story begins in the summer of 2003.. it was actually the first European tour that I went on with the band. (Eastern Standard Time was founded back in 1995 -- James McDonald the drummer, is the only remaining original member.) We had a show at the ISC club in Bern, Switzerland where Roy lives now. We were surprised and honored when we found out that he came to see us. so of course we invited him up on stage to do a freestyle chat during the show. The crowd loved it, and of course we all had a blast playing with a living legend.

Over the years we kept in touch. Two years ago, Roy came to the States and gave us a call asking us to back him. We jumped at the opportunity, and again had a ball. Roy poured on the compliments, saying we were the first backing band he'd ever had that played his music to the detail, including back-up vocals. again we were surprised, and humbled.

Do you rehearse? What's it like to play Symarip songs?
As far as learning the songs, musically they are very simple, classic tunes. i think the feeling and energy that goes into performing them is what really makes the difference.

What's Roy like to work with?
Roy is great to work with. he's far from demanding, really likable guy, and very laid back. Hangin' out with him was like chillin' with one of my uncles! I learned a lot about the history of skinhead culture as well as the music that fueled it in casual conversation with him.

Are you excited about the show in Chicago?
We're really excited about the chance to hangout with an old friend and make music! the show's gonna be GREAT.. we're doing a set of our own as well as with Mr. T-bone (Italy) another one of our close friends for years, then we'll top it off with Roy doing his thang! it'll be a WHOOOLE lotta fun!
Tickets for the show are available at the Riot Fest ticket page.